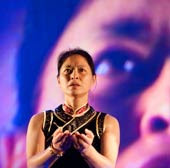 We're in the last week of our rehearsals. It's a fascinating process, and I only wish there was time to blog it properly. Come along to Soho Theatre next week, and you'll see what I've been on about for two years!

Meantime - here's a little Q&A I did for the Shanghai publicity people:

1. What was your purpose in setting up Border Crossings?

Border Crossings is an attempt to make theatre about what it feels like to be alive in the current moment, when the world is so much more integrated than ever before. We wanted to set up a company which allowed different cultures to speak to each other, directly and equally, and which explored the ways in which theatre could bring about cross-cultural dialogues and exchanges.

2. What would you like to express through the series of Orientations plays?

These plays came about through an interest in traditional Asian performance forms, and particularly the forms where men play women and women play men. It was interesting to see how this might reflect some of the changes going on in gender relationships around the world. The plays have moved on a lot from that start point - but they are still about the many different forms of human love, and about the ways in which sexual relationships and cultural relationships overlap.

3. What does Re-Orientations talk about?

This is a play about the aftermath of catastrophe. All the main characters are dealing with some sort of loss. Julian and Marie are dealing with the loss of their daughter, and Song that of her lover. Tsrui-hua and Velu have also lost children. I suppose it's to do with the sense that we may have lost our future, and that many aspects of our past are difficult to face. It's about asking how we can move forward in the 21st century.

4. What's the speciality of the production Re-Orientations?

I think audiences will be very struck by the way we use lots of different languages on stage - Chinese, English, Swedish, Kannada... This is what the world is like now, of course - just walk down Nanjing Lu and you'll hear many languages spoken - but it's rare for the theatre to take this on, and still tell a story in a way that a whole range of audiences can understand. We also use lots of different theatrical languages - naturalism, film, yeuju, yakshagana, ballet, modern dance, projected textÉ. We wanted to come at the story from as many different angles as we could. I should add that the whole play has been made by the actors: there is no writer as such and no pre-existing script. We didn't know what the story would be before we started to work on stage.

5. Why did you choose Shanghai Dramatic Arts Centre as your partner?

SDAC was the only company I knew of in China which had the artistic vision and the capacity to be our partner organisation. I'd got to know the company's work over the course of several visits to Shanghai, and in particular Nick Yu's desire to engage in cultural dialogue, and to work in modern and innovative, experimental ways. When we found the three actors who are involved, we realised just what an exciting journey this would be.
Posted by Michael Walling at 2:54 pm