The Search for the Throat Singers 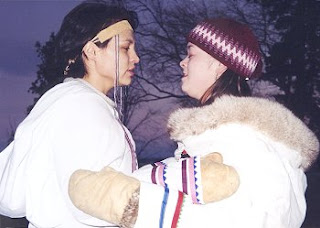 We've known for some time that we wanted the Inuit presence to be a strong one in this year's Origins Festival. We've programmed two films from Nunavik, and Simon Lynge, from Greenland, will be playing at the concert - but we also wanted a real sense of the traditional culture. Which really meant drum dance and throat singing.
When I was in Montreal in 2008, I was lucky enough to meet Taqralik Partridge and Evie Mark (pictured), both of whom seemed keen to come to London. But neither was available this time. Evie, however, had a friend called Beatrice Deer.... who also turned out not to be available.... but Beatrice had a friend called Leah May - and she and her partner (throat singers work in pairs) could come. The only problem was that Leah doesn't live in Montreal. She lives in Kuujjuaq, which is a very long way from Montreal. In fact, it's a very long way from anywhere. And so the transport costs are astronomical. Luckily, the wonderful Inuit airline First Air (run by the amazing Pita Atami and his Makivik Corporation - www.makivik.org) stepped in with a pair of tickets to Montreal, and we're off! They will be performing at the Origins Concert at Rich Mix on July 2nd, as well as in Trafalgar Square for Canada Day. 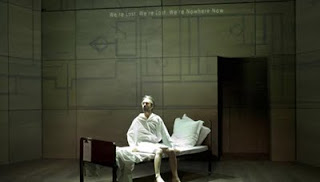 Last night, I went to Soho to see Chekhov in Hell by Dan Rebellato, who spoke at our event with the Platform for Intercultural Europe last year. The play was very characteristic of Dan - a series of snapshots from contemporary urban life, full of sharp comic observation. It was also very well performed - especially by Ruth Everett, whose string of grotesques were all horribly credible.
Posted by Michael Walling at 5:54 pm