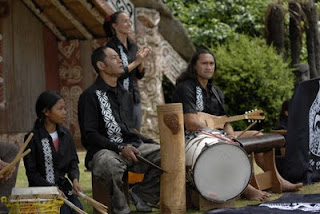 I'd meant to blog daily through the Origins Festival. Fat chance. It's been the craziest, most exciting week for a very long time. Perhaps the craziest week in the company's entire history. No - that was Mexico in 2001... but we're close.

Noel Tovey's Little Black Bastard was the first week's theatre show, and it's got great reviews and responses across the web. Noel flies back to Australia this evening - hopefully with a sense of the job being really well done! He's shared his extraordinary life story with people hanging on every word.

The film festival kicked off on Saturday with a great screening of Our Generation, followed by discussions with Julian Burger and John Packer from the Human Rights Centre at Essex University. Tonight we move on to Inuit films, having taken in the Sahara along the way!

The main theme of the weekend has been music, with the Origins Concert on Saturday night and the Family Day on Hampstead Heath yesterday. The Heath event began with a Maori powhiri, or welcoming ceremony, led by Ngati Ranana, to welcome the First Nations people to London in an appropriate way. It was wonderful to do this in the very week that Sydney acknowledged the colonisation of Australia to have been an invasion. Somehow it felt as if we were a part of a real spirit of truth and reconciliation - and the amazing atmosphere at both events seemed to confirm that.

We've also been able to bring young people into the festival spirit in other ways - our education project had a really big moment on Friday when we had hundreds of schoolchildren parading through the City with model wakas, and dancing the haka on the steps of St. Paul's Cathedral. Wild.
Posted by Michael Walling at 3:11 pm