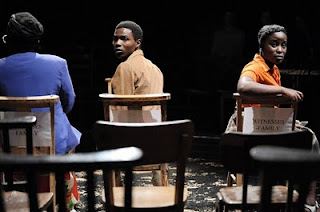 Only two characters ever got to sit in the centre of the stage - and they were both ghosts. A Rwandan man and the South African child whose mother refused to take a chair. They were evoked to speak to those who had killed them, those whom they haunted, those who knew exactly how they died. But, even at the centre of the stage, they could not speak directly to those they had left behind and who were desperate for knowledge of them.
Posted by Michael Walling at 6:12 pm