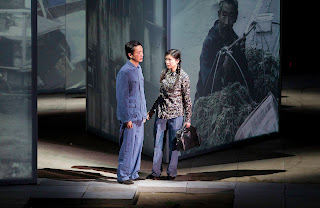 I should say that there is much about this production which is very strong - visually it is stunning.  But, because of the status it has been afforded in the World Stages season and the whole Olympic thing, it has a greater responsibility to its subjects in terms of cultural exchange, historical honesty, mutual respect and acknowledgment of complex truths.  Because of this status, it's getting glowing press like the Dominic Cavendish's review in the Telegraph which suggests that "it belatedly brings that vast country – and fast-emerging superpower – into our parochial modern theatrical arena."  Well, actually, no - Dominic.  Border Crossings produced Dis-Orientations; in 2006, and Re-Orientations in 2010.  Both of these were collaborations with artists from mainland China, which drew off their own direct experience of their history and their present.  And now we're working on Consumed, which will bring our journey right up to the present moment, while continuing to acknowledge the importance of the past.  Some of us haven't been parochial for a long time.  In fact, as long ago as the late 90s, I was working with Peter Sellars on Nixon in China at the ENO.  Alice Goodman's text really explored the many layers of the Cultural Revolution, and permitted no pat moralistic responses.
Posted by Michael Walling at 12:28 pm