A weekend with Africa 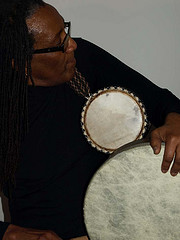 Yes, I know there were one or two other things which made this a great weekend, but in between cheering the various gold medals, we managed to squeeze in a couple of amazing events at the Africa Centre, as part of the Africa Salon season which we are curating with them.  On Saturday afternoon, we had a fabulous time with Eugene Skeef (pictured), the great South Africa musician and cultural activist.  The format for this session, called Music and Politics, was similar to the one we created for the opening of last year's Origins: a conversation around a political, cultural or spiritual topic, followed by a piece of music which gives the audience an emotional space to think about what has just been said.  Eugene has led such a rich life, and is such a wonderful raconteur, that the time flew by.  The main focus for much of the conversation was his close involvement with Steve Biko and the Black Consciousness movement in the 1970s - there remains much in Steve's analysis of what was wrong with the apartheid system that applies to our globalised world order....  After 32 years in London, Eugene is planning to return to South Africa soon, precisely because he feels the country now needs its artists, and in particular artists who create a healing space, more than ever.

The role of music in conflict resolution was an important topic in our discussion.  Eugene had brought with him an udu, which is a Nigerian women's instrument, used specifically for the purpose of creating a healing space.  Rather wonderfully, his particular instrument was made in the traditional form by a Zulu cousin of his, and decorated with Zulu designs.  So it is in itself an intercultural artefact.  Eugene's music is wonderful in its interculturality.  It's like listening to the world: you can hear the different cultures, blending together but absolutely retaining their own integrity. On Sunday afternoon, we joined forces with our old friends at Sandblast Arts to present the UK premiere screening of Tebraa: a film from the Western Sahara, which looks at the lives of ten different Saharawi women, in the occupied territories, the refugee camps, and in exile.  Very excitingly, we were joined by two Saharawi men living in London, one of whom, Sidi, is the UK representative for the Polisario Front, fighting for freedom in this last, totally unknown, Africa colony.  There's more about this conflict here.  Much of the discussion with Sidi after the film was about why this human rights catastrophe is so unknown in the West.  Campaigning organisations, it seems, do not regard it as a priority precisely because it isn't on the news agenda.  The US doesn't take any interest because it depends on a relationship with Morocco, the colonial power, to obtain the precious phosphates which it lacks, and which are under the sands of the Western Sahara.  The academics who advise the US government are often funded by Morocco...  and so it goes on.  As so often, it seems that the only way forward is to empower people on the ground - to follow a grass-roots approach.  It was the Western Sahara that started the Arab Spring - so there is precedent.

One more event to go on Tuesday at 7 - I'll be in conversation with Malawian poet Jack Mapanje.

Posted by Michael Walling at 12:42 pm