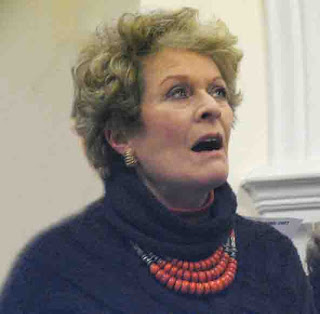 Last night saw the last of our talks on African theatre, which, like the first one back in May, was co-presented with Chickenshed, alongside their production of The Rain that Washes.  Janet Suzman is a "Founding Patron" of Chickenshed, so it was a great chance for me to interview her for 45 minutes.

If only it had been longer.  While Janet is incredibly famous in the UK as a classical actor, and has had the odd brush with Hollywood as well, very few people know about her work in South Africa.  But that is actually the most exciting bit.  As she said in our chat, there is something about the country of her birth that has kept pulling her back throughout her life; and there is something about countries in crisis, countries which have been invaded, and countries very much in the process of becoming that makes their theatre vital and immediate.

We talked about her early years, her growing awareness of injustice, and her family's involvement in the struggle - Helen Suzman was her aunt.  We talked about her breaking of Equity's cultural boycott to direct John Kani in Othello at the Market Theatre - she got permission from the ANC in exile, who agreed that Shakespeare was a protest playwright - and in any case, she suggested, the boycott played right into the hands of the regime as it meant there were no dissenting voices in the public arena.  We talked about her adaptation of The Cherry Orchard as The Free State - an extraordinary celebration of the end of apartheid.

Today, The Free State perhaps feels unduly optimistic.  But, as Janet said, it encapsulated the spirit of a moment, the euphoria that greeted Mandela's election.  Almost twenty years later, laws from the apartheid era are being used by a black President to justify the shooting of striking miners.  This isn't the Rainbow Nation which the play eagerly expected.  And so we talked about what a revival today could mean - how the cold wind of the future might blow through the falling trees.
Posted by Michael Walling at 2:12 pm