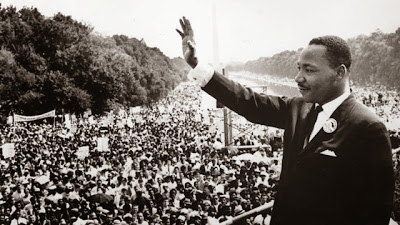 It was quite a year, 1963.  If the BBC is to be believed, the most significant of the 50th anniversaries we've been celebrating was the creation of Doctor Who - but I'm inclined to think that the Kennedy assassination, Martin Luther King's Dream speech, the Cuban missile crisis, the arrival of Nelson Mandela on Robben Island and the Beatles' first LP are all a bit more important.  Not that I want to do down Doctor Who.

Philip Larkin said it was the year that sexual intercourse began.  If so, then some people must have got in a few months ahead, because 1963 was also the year when I first saw the light of day.  Which has made this an important anniversary year for me too.

Of course, looking back over 50 years on Planet Earth does tend to make certain events feel more distant.  Doctor Who certainly seems to have been around for ever.  But so many of the other key moments from that year don't seem distant at all - even to me, who had not consciousness of them at the time.  The Dream speech is a defining moment of the contemporary era - a moment which gave definition and articulacy to so many of the battles over inequality and injustice that are still being fought today.  Back in the summer, I was invited to a commemorative event at the US Embassy, with Jesse Jackson speaking and a broad range of advocates for the UK's diversity agenda in the audience: Shami Chakrabarti and Keith Vaz, and a lot of artists.  It was very clear how present and immediate the speech still felt for all of us.  It's very emphatically of the now.

So my 50th year experience is not the form of middle age I had expected.  I had thought that my past would start to seem more distant, because it was.  In fact, it's seemed rather the opposite.  I've started to think of events before 1963 as closer to me, rather than further away.  If 1963 feels like a year which is still very present, then for my parents, who were young adults then, the war that had ended only 18 years before must have felt very immediate indeed.  And for somebody who in 1963 was the age I am now - the First World War would stand in the same relative historical place that the Dream speech does for me.  So next year's centenary is not really about that conflict receding from us, so much as an awareness that it is not actually that distant - that history is not the foreign country where things are done differently that we explore through our schooling, but rather a very present force, shaping our culture, our political context, our very ways of thinking and modes of being.

I've always known this, of course.  But this year has made it seem very immediate and real.
Posted by Michael Walling at 10:48 am