With Teatro dell'Argine in Bologna 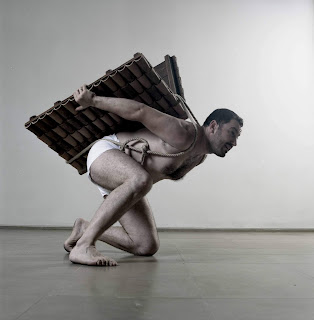 It was Friday afternoon in Bologna’s Contemporary Art Museum, MAMbo.  We were clustered around a pair of huge photographs – an artwork by the Albanian migrant artist Adrian Paci, who now lives in Italy.   Francesca, the facilitator, was asking us to describe what we saw.  Some people commented on the huge effort the artist (whose photographic artwork is a self-portrait) was making to carry the inverted roof on his back.  Some mentioned the pain that must result from the rope that tied it around him.  Others mentioned the strange coldness of the studio space which held him, and others again his near-nudity.  “He’s wearing a diaper,” commented Ann Birot-Salsbury, with a characteristic combination of American directness and European irony.  Slowly we began to reach towards more nuanced and informed, but also more subjective responses.  Wasn’t Bologna full of images in which near naked, bearded men in “diapers” were shown as suffering?  Was the shape of the inverted roof like the wings of an angel?  Or of Icarus?  If this was Icarus, in what sense might he be flying too near to the sun?  Were the photographs perhaps an allegory of the refugee situation in Italy – a man carries his home on his back, tied to him like cultural baggage – and flies too close to a perceived source of light and energy.  None of these responses was “right” or “wrong” – and they said as much about the people making them as they did about the artwork.

This approach, Francesca explained, was the way she engaged groups of learners - whether those were schoolchildren, students, migrants or refugees – with the museum’s collections.  She then led us into the next stage of her workshop process, asking each of us to create through drawing and writing a “suitcase” that we would carry with us on a metaphorical journey – a case that contained an object, a memory, a place, a person and a meal.  Given that we had been thinking about and talking to refugees all week, the exercise proved astonishingly challenging and moving.  It was not simply an exercise in constructing a personal or cultural self, a sense of identity: it was also an exercise about loss.  In choosing what (or who) to take on a voyage, you are forced to contemplate how much you will leave behind.

This brilliant and simple workshop, based on visual art, exemplified what for me is emerging as the strongest element in THE PROMISED LAND project – the need to develop a pedagogy that recognises and embraces subjectivity and viewpoint as necessary and productive attributes of cultural difference; and so celebrates learning as a creative process, which unlocks and reveals new ideas beyond the existing knowledge of either the learner or the facilitator.  This approach was not only seen in Francesca’s workshop, but also through the working practice of our host organisation in Bologna, Teatro dell’Argine, whose development of drama through games and improvisation ran as a constant thread through the training week.  I particularly responded to a game in which the participants were given a hoop, which was used as a mobile window: the person holding the hoop at any moment “seeing” something through it, and responding to it with words, movements and sounds that are followed by the rest of the group in chorus.  On the Thursday evening, we were able to see the developing outcomes of such practice, when we attended a rehearsal of a new production based on the myth of the Tower of Babel, performed by Argine’s ESODI group of young people, which includes a high proportion of refugees and migrants.  The extraordinary levels of openness and trust which the company had unlocked in these insecure and potentially traumatised young people was a joy to behold: the sense of welcome and safety in the room extended to us, as a group of outsiders, accepted into their warm-up games with eye contact, physical contact and deep emotional warmth.  This combination of playfulness and trust was the key to the creative energy we witnessed and experienced that evening.

These thoughts were given focus through the brilliant framing talk we were given by Simona Bodo.  Developing the ideas behind the MAMbo workshop (which she attended with us as a participant), Simona suggested an antithesis between a culture of CONSERVATION and one of CONVERSATION – with the implication that European cultural and educational institutions need to respond to the changing demographics of the populations they serve by making a shift away from a paradigm that privileges the preservation and passing on of existing knowledge and towards one that uses culture as a resource for creative interaction.  HERITAGE, she suggested, needs to be questioned as a concept: it suggests that history and culture are somehow owned by virtue of birth, whereas the current moment of post-coloniality, cosmopolitanism and mass migrations suggests a need to engage in the global interconnectivity of cultural production, of the art and artefacts held in museums, of the texts and myths that become contested spaces in the dynamic theatre of the 21st century.  If we discard HERITAGE and embrace HISTORY as narrative, process and conversation, then we are opening ourselves to learning, to dynamism and to democracy in its fullest sense.

Simona Bodo’s talk also drew off the work of Naomi Klein in relation to the rhetoric of crisis.  To portray something as a crisis, argues Klein, permits the holders of the narrative (particularly governments) to ignore underlying and ongoing causalities, to suspend legal and moral obligations, and to generate a climate of fear and hatred.  This echoed the words of Chiara De Carlo, who works with the refugees living at Opera Padre Marella (OPM).   In Italy, she told us, the rhetoric of a “refugee crisis” has been employed to shift policy and undermine legal process, effectively denying refugees their human rights as defined in the Universal Declaration 1948, and (specifically to refugees) the Geneva Convention 1951.  That sounds very abstract and legalistic – but when talking to Paul (name changed to protect identity), a young man from Nigeria living at OPM, it became a flesh and blood reality.  Paul had been a professional football player in his home country, but had fled after a violent event, possibly involving the deaths of his parents, had traumatised him (1).  He crossed the Sahara, and came to Italy on an over-crowded boat.  In a way he was one of the lucky ones – he was housed in a caring and nurturing home at OPM, and had the chance to act with ESODI and to play football.  But he had also experienced racism and violence around the game, and, after two years, he is no further down the path of acquiring refugee status or knowing whether he will be able to remain in Europe.

Paul is being held in a limbo outside social narrative or cultural engagement.
He is being objectified – not empowered.
Conserved – not conversed with.
He is not a statistic in a crisis, but a young man who has experienced deep suffering and loss.
He is also resilient, determined and moral.
Our European societies can only benefit from honouring the contribution he can make.
*
I wrote this piece as a report for our steering group on THE PROMISED LAND - and there will be more about the week on the project blog soon, from the viewpoint of one of our German partners.  But I felt I needed to publish this today, in the light of the news from Italy.  The President may have prevented the populist parties from appointing a Finance Minister who wants to leave the Euro - he has not intervened to stop the appointment of an Interior Minister who wants to deport asylum seekers and migrants.  Matteo Salvini's declared intention to deport 500,000 "illegal" migrants presents an immediate threat to people like Paul, whose cases have not been decided, and whose well-being, safety, possibly even lives, are in great danger if they are returned to what Salvini terms "home".  The policy is in clear breach of the Geneva Convention, and it is essential that the international community, particularly the EU, insist on the rule of law.

(1) I should point out that this information was offered spontaneously by Paul in conversation with two of us, and was not elicited in any way.
Posted by Michael Walling at 6:03 pm