Red, Black and GREEN: a Blues 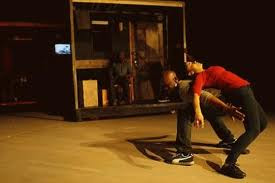 This is not an easy piece of theatre to write about: but the best theatre rarely is. When theatre is most powerful, effective and meaningful, it's because it is doing something that could not be done in any other way. It is communicating something very pure through the presence of the live performance.

Red, Black and GREEN: a Blues, which I saw last night at San Francisco's Yerba Buena Arts Centre, is a performance which fuses narrative and poetry, character, dance, video, music, hip-hop, blues, and a sculptural set in many ways more akin to museum than theatre. For the first half hour, the audience walks around the set, which starts off looking like a contained house (or shack), and slowly splits into four separate spaces. There are also four performers (the creative artist himself, Marc Bamuthi Joseph, the set designer who also sings the blues, a musician and a wonderful actress-dancer-singer called Traci Tolmaire), four seasons around which the piece is structured, and four locations, of which more anon. The performers are very active during this first section, including a speech by the sculptor-singer Theaster Gates (some of which is in the video here), which amounts to an artistic manifesto for the whole project. The next hour has the audience seated, and uses the range of art-forms to tell a series of related stories which have arisen from the lengthy process of the piece's development - in Oakland, Houston, Chicago and New York.

In each case, the company has gone into the community, and especially the black community. Marc has engaged with these communities through his eco-arts festivals (remind you of anything?), and has asked questions around what sustainability actually means in these poorer neighbourhoods. The relationship between the green movement and black politics is explored and problematised - especially in relation to the construction of Africa as an unspoilt green space. Marc talks about meeting a Sudanese woman who lost her son in the war there. He also talks about his own visit to the Sudan. In the week of Gaddafi's death and the accompanying awareness of a new colonialism on the African continent, this was salutary stuff.

I could go on and on about this piece, and about its significance beyond the moment of performance itself. It reminds me of Ngapartji Ngapartji in the way it brings the community engagement very directly into performance, and allows the performance to operate in a very direct dialogue with community. It practices what it preaches (the set is made of re-cycled materials, and much of the power is from solar batteries). It is art which envisions a better future. Which is what art is for.
Posted by Michael Walling at 2:04 am