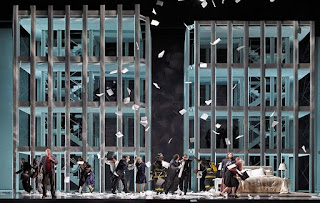 I've been in the US for the last ten days, directing Xerxes for San Francisco Opera. It's very striking how, ten years after the event, the country is still so dominated by the events of 9/11. At the recent talk I did for Central with Geoff Colman and Maya Zbib, we talked about how the arts take time to absorb and respond to major historical events - Geoff said it was about a decade before the German theatre engaged with the fall of the Berlin Wall. Maybe it's the same here - 2011 is the moment when America takes stock of its moment of trauma.

The responses are very varied, though. I've encountered two since I've been here. The first was the opera company's production Heart of a Soldier (pictured). This is a huge new opera, which is clearly attempting to construct itself as the great piece of the moment, and is also trying to engage directly with politics. It's the life story of Rick Rescorla, a soldier in the US army (though originally English), who became a security manager at the World Trade Centre, and died in the attacks. The piece is very much about the "ordinary hero" and his sacrifice - the problem with it is that there's no sense of the context in which his heroics take place. He serves in Zimbabwe and Vietnam, but there are no African or Asian characters on the stage, and the wars all seem to blend into one. There is a Muslim character (Rick's best friend Dan Hill became a Muslim, and there is a strong moment when Islamic music portrays the religion as a real calling for him) - but even so Islam features only as an ideology of the Other (and seems to have very little effect on Dan, who you would think might have been very disturbed by his best friend being killed by his co-religionists). There is no sense of why anybody, Muslim or otherwise, might wish to attack America; and so the audience is invited to unite in mourning, rather than look for solutions. Perhaps the very public and emotive form of American opera is incapable of a more nuanced response, at least at this distance - we're still waiting for an American company to be brave enough to stage The Death of Klinghoffer in the 21st century. As the performance began, the audience stood to sing the Stars and Stripes, as a vast projected flag fluttered on the front-cloth.

By way of contrast, I've just finished reading Amy Waldman's remarkable novel The Submission. Unlike the opera, the novel does not focus on a victim, and so avoids sentimentality. Rather, it looks at the complex question of how the survivors should best deal with the events, and with the process of mourning. It asks how America can best re-define itself in the light of the attacks and their aftermath. It also manages to do this without launching any diatribes against Bush's foreign policy. The basic premise, that the architect of the winning entry in a competition to design a memorial for the victims turns out to be a Muslim, is of course counter-factual (the real architect is a London born Israeli-American, which leads to intriguing speculation in itself - why did this not lead to any controversy of the kind unleashed in the novel?). Waldman's premise allows her to take in a wide cross-section of American society, including the crucial figure of a Muslim widow, an illegal immigrant, whose husband was a cleaner in the Towers. It's a subtle, sophisticated piece of work, which challenges America to make sense of its own multiculturalism, and to redefine its global role in the light of the need for intercultural dialogue.
Posted by Michael Walling at 3:27 am