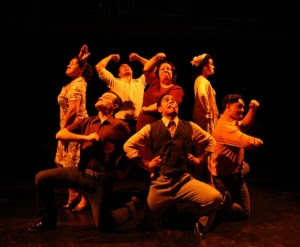 I first met Hone Kouka and Miria George a few years ago when they were in England for Rosanna Raymond's Pasifika Styles Festival in Cambridge. They came along to the Border Crossings Laboratory and ran a workshop for us. In the workshop, Hone was very keen to explore ways in which Maori culture and ideas could be put to theatrical use. He worked on the movement styles drawn from birds, the haka, waiata and chants. At the time, I could see he was working his way towards something. And now, several years down the line, I've seen what it was.

Tu, his new play at the New Zealand International Festival, is a big step forward for Maori dramaturgy. Hone brings the Maori understanding of time and history into the play - in Maori thought it is the past that is in front of us, because we can see it, and in this play people quite literally look at the past. The cultural forms emerge beautifully out of the characters' need for self-expression, giving physical and poetic voice to their inner journeys. It's very exciting work. What's more, it's performed in an urban marae, which is an inherently theatrical space, and lends the whole a sense of community and ritual combined. The marae is traditionally configured like a traverse stage, and Hone uses that wonderfully to articulate confrontation and journey. It's a great night.

It also has a cast of ten and a big set, so I don't think it's going to be practical for me to bring it to the next Festival. Sigh.
Posted by Michael Walling at 10:30 pm