I was wrong about Obama winning in Nevada. That shows how unreliable conversations with theatre people tend to be as a litmus paper for public opinion. On the back of the Nevada caucus, Hillary Clinton is now well and truly the front runner. Again. So the electorate, at least in the casino state, has responded to her spin about idealism and rhetoric being no substitute for experience in practical politics and getting things done. The irony of this is that Hillary’s biggest success was probably in the field of idealism and rhetoric (her Beijing speech on gender equality and human rights) and her biggest failure was in practical politics and getting things done (the aborted health care reforms). But America has a short memory.

Bernard Shaw said that we were two countries divided by a common language - and I often feel that the cultural gaps are pretty deep trenches. When I tell Jan about our production of Fool for Love in 1995, she muses as to whether English people could ever really get to grips with Sam Shepard. Isn’t it like Americans trying to do Oscar Wilde? I remember, years ago, sitting with her watching a truly appalling production of The Importance of Being Earnest in Portland, Oregon; and hope to hell that our production didn’t look like that to any American eyes.

In spite of all this, I tend to feel that the outsider’s eye can actually be very acute, and can often see aspects of a culture which those inside it don’t perceive. This trip has been less than a week long, but several people have commented on how the production plans for the Dream seem to suggest a very detailed insight into not just American society, but very specifically Lake Tahoe society. I’m not claiming any prophetic status - it’s simply that theatre itself is a powerful crucible in which social and cultural tensions work themselves out. And this place has plenty of those.

Oh yes - I’ve also discovered that the latest fad in American criticism is something called Green Theory. Eco-crit. Looking at literature through the haze of climate change. You can get a Theory for most things these days, if only you look hard enough.
Posted by Michael Walling at 9:36 pm 1 comment:

A Tale of Two Lakes 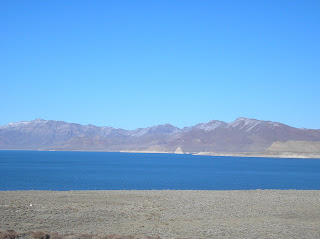 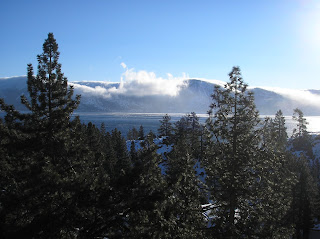 I'm in Nevada, USA - on caucus day. On my way to a meeting yesterday, I passed through the University in Reno, and who should be there but Barack Obama. From the conversations I've had here, I suspect he will win in this state. It's rather inspiring that people here are talking a lot about the need for real vision in politics, and seem to be sick to death of pragmatism.

The reason I'm here is that my old friend Jan Powell, who I worked with at Tygres Heart Shakespeare in Oregon during the early 90s, is now Artistic Director of the Lake Tahoe Shakespeare Festival, and has invited me to direct A Midsummer Night's Dream here in the summer. I could hardly say no.... Tahoe is an amazing beauty spot - an Alpine lake in the Sierra Nevada. At this time of year, it's surrounded by thick snow. I'm staying at the Cal-Neva hotel (on the border between Nevada and California), which was the haunt of Frank Sinatra, the Kennedys and Marilyn Munroe. And, like everything else in Nevada, it's a casino. There are slot machines everywhere - even in the airport and the supermarkets.

Partly because of the amazing landscape, and partly because of what we've been doing with Origins, I've been drawn to the idea of using the Native American spirituality which is so powerful here, and relates so well to the landscape, as a route in to the magic of the Dream. I'm also, of course, very aware of indigenous protocols, as a result of our work on Bullie's House and since. So Jan, Catherine Atack (the Festival's Executive Director) and I bundled ourselves into a car and set out to meet the Paiute nation.

This involved a trip into the desert. Nevada is astonishing: the distance from the Alpine Tahoe to the lunar landscape of Pyramid Lake is really very short. Yet the contrast couldn't be greater - look at these pictures! Pyramid Lake is fed from Tahoe via a river, and the Paiute people have been fighting against its damming and to protect their environment for a full century now. At their beautiful museum near the town of Nixon, two Paiute men, Ben and Ralph, talk to us for a long time, with that incredible generosity of spirit shown by so many First Nations people, when the listener shows a bit of open-nes and interest. Ralph, the elder of the two, tells us stories in his own language, and then translates them into English. He talks about the 10,000 year history of his people in this place, about their brief relationship with white America (the first contact was 1844), and about the prophecies of global warming and climate change (see Titania's great speech at the start of the Dream). It's them, not us, who suggest that there might be ways to collaborate on the production, to involve them in our process, and to bring the children of the tribe to see it.

It's one of those rare, privileged days, when you remember just why theatre matters, and how cultural dialogue rally does have so much to give.

My visit here is very brief, so Jan and Catherine will have to contact the Wahoe people, whose traditional land is Tahoe itself, after I've gone. If the response is similar, we'll really be on to something.
Posted by Michael Walling at 4:20 pm No comments:

Dzifa Glikpoe stayed on after the end of Dilemma, with an Arts Council International Fellowship, hosted by ourselves and Africa Beyond. I've had the job of putting her in touch with people and organisations who can help her develop the skills and knowledge she needs to move the National Drama Company on when she gets back to Ghana. Nice to feel the whole thing will really leave a legacy.

So - she's been observing actor training at Rose Bruford, and giving workshops at the Royal Scottish. She's currently at the Barbican in Plymouth, seeing how a smaller theatre operates, and she's going to be watching Ramin Gray in rehearsal at the RSC. Plus, we're going together to find out about the Theatre for Development MA at Winchester, and we met with Femi and Thomas from Tiata Fahodzi last week. This is the company whose production of Joe Guy at the Soho I really enjoyed in the autumn. The remit is to work with British artists from the African diaspora, and the line-up for the 10th anniversary gala at the end of this month suggests they do very well! Dzifa turns out to know the woman who co-founded the company wth Femi. She's now back in Ghana, teaching at Legon, but before that she was acting here, and contributed half the name. "Fahodzi" is Twi for "freedom". It's part of Femi's emphasis on a West African, rather than a strictly Nigerian, identity for the work. Kwame Nkrumah would have approved!
Posted by Michael Walling at 12:02 pm No comments:

Email ThisBlogThis!Share to TwitterShare to FacebookShare to Pinterest
Labels: Dilemma of a Ghost, Ghana, Tiata Fahodzi

In Saturday's Guardian, there was an interview by John Harris with the Culture Secretary, James Purnell. The underlying suggestion seemed to be that there is a huge change going on in Cultural policy; and the interview is timed to coincide with Brian McMaster's review of public arts funding, which seems to shift the emphasis away from the last ten years of "art as social engineering" and towards something called "excellence". In theory, this should be no bad thing. The arts have been moithering around since 1997, trying to prove the social value of projects, instead of being honest about what they are actually doing. Purnell and McMaster have also rather adroitly wrong-footed the many organisations currently protesting against the Arts Council's recent Night of the Long Knives: the protests have all been couched in the language of social inclusion (e.g "we cater for children, pensioners, refugee communities and disabled people"), at exactly the moment the DCMS has moved away from this towards a language of artistic quality. My concern is that this may just be a smoke-screen. Reading between the lines of the interview, the emphasis on quality looks very like an excuse to cut organisations which would just have to be funded if social inclusion were the key criterion. When Purnell says that he won't "tolerate average work because it happens to be in a particular location", it's clearly the voice of the man who cuts funds, rather than the man who provides them.

I like the way he defines "excellence", however. "To have [people's] meanings shaken up and think about the world in a different way". That sounds like what we do. How far it will be possible for public policy to mould an arts sector which does this is something only time will tell. I just hope we don't see a return to the definition of "excellence" we saw in the Glory of the Garden days, when the great monoliths of the cultural sector gobbled up every penny going. Excellence is not the same as centralisation, nor is it the same as scale. I hope Purnell stands by his own definition.
Posted by Michael Walling at 11:10 am No comments: