Mo Yan and me 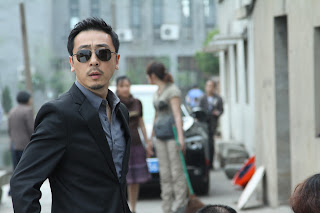 The picture isn't Mo Yan, of course.  That's Ning Li, the famous Chinese actor, who I picked up at Heathrow on Friday evening.  Tomorrow, I'll meet him at Tara Arts to start rehearsals for Consumed.  A couple of days later, we'll be joined by Song Ru Hui, on her third Border Crossings trip to the UK.  And this is our third production in collaboration with a Chinese company and leading Chinese artists.  It's a pretty important line of work.

So - I've been keeping a very careful eye on the way the media has been responding to the new-found fame of Mo Yan, winner of the Nobel Prize for Literature.  We were in Shanghai in 2010, when it was announced that the Peace Prize had been awarded to imprisoned Chinese human rights activist Liu Xiaobo "for his long and non-violent struggle for fundamental human rights in China".  The TV screens went blank, and the firewalls went very high.  Some days later, there was an outbreak of calculated news coverage: the West was interfering in China's internal affairs, ran the official party line. No such fury over Mo Yan: the Chinese government has been delighted by the prize, and he has emerged as a national hero.

The response of the Western press, and especially the British, has been rather different.  Here, Mo Yan has been castigated as Beijing's poodle, condemned for not being a dissident, accused of acquiescing in totalitarianism.  Here, it would seem, we expect Chinese artists to be political rebels.  Nothing else will do.  The reviews of Mo's new novel Pow! have uniformly commented on what isn't there.  For example, Chris Cox in the Observer says that "Pow! doesn't land any blows on the Chinese regime."  Well, why should it?  Do we castigate Rose Tremain because she doesn't make overt attacks on David Cameron?

Actually, I suspect Mo Yan is a more political writer than the Western press, in search of heroic dissidents, has realised.  The clue is in the name.  "Mo Yan" is a pen name: it means "say nothing".  It is an echo of the advice that the writer's parents gave him during the Cultural Revolution.  It suggests the means whereby he has survived and thrived in a state which is not always friendly to freedom of expression.  In order to be subversive, art does not have to be direct.  In fact, direct criticism of government is close to suicidal in many parts of the world.  Magical realism, a genre close to Mo Yan's heart, was invented in Latin America as a means to cloak the political in fantasy and so to survive.  And by drawing so much attention to his "saying nothing" as to make it his own name, Mo Yan invites us to look under the surface of the novels for meanings that may not be immediately apparent, least of all to the naive Westerner in search of dissident heroes.

Pow! is about a young boy, Xiaotong, his village in modern China, and the prevailing obsession with meat.  This, in itself, is a central issue in the cultural change now sweeping the country: what was until recently a largely vegetarian society has become seized by the desire to consume meat as a mark of wealth and economic success.  The shift is having profound and damaging consequences for the global food chain and eco-system.  It is, in fact, one of the biggest problems confronting the contemporary world.  It is also symptomatic of the materialist drive which is possessing modern Chinese society.

Of course, Mo Yan, saying nothing, does not attack the regime that has encouraged all this.  He portrays the absurdity of the world he lives in and leaves his readers to draw their own conclusions.  This kind of empowerment could itself be regarded as an attribute of democracy.

Will our new play be similarly subversive, in a similarly subtle way?  We aim to take it back to China later in the year, and that does mean we have to reckon with the censor.  And yet, in 2010, we were able to show work there that treated the Cultural Revolution, the single child policy, homosexuality and infanticide.  We made no overt statements of our position, but rather opened the possibility of debate; and that, I think, is what theatre's role should be.  Consumed is about the current moment: it deals with high finance, corruption, greed, and consumerism.  It is also about the web.  None of this makes it an attack on Beijing - but it's no cosy bit of toadying either.
Posted by Michael Walling at 6:51 pm No comments: