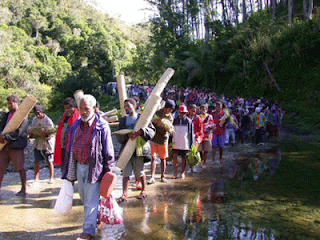 I knew very little about this land, and its indigenous Kanak people, although we did have a poem by Kanak writer Paul Wamo in the last Origins programme book. There was a struggle for decolonisation as recently as the 1980s, led by Jean-Marie Tjibaou. After he had achieved an agreement with the French government, Tjibaou was assassinated by the more radical figure Djubelly Wéa, who felt he had compromised on the aim of absolute independence. Fifteen years on, through a ceremony of reconciliation which exists in Kanak culture, it became possible for the widows of these two men to embrace. The process through which the reconciliation was achieved, and the extraordinarily moving ceremony which it involved, was the subject of the film Tjibaou, le pardon, which was screened at the conference. And Marie-Claude Tjibaou herself was there to talk about it with us. It's a very special film indeed - and you can watch it here.
Posted by Michael Walling at 6:08 pm No comments: