Where do you stand?

This Flesh is Mine has been running since Monday, and the response has been overwhelming.  The Guardian has a great piece by Ellie Violet Bramley about the making of the show and its relevance to the conflicts in Palestine, which is the main Editor's Pick today!  It highlights one of the main issues in the production - how it complicates the audience's relationship to the geo-political significance of the Middle East.

What's very exciting, watching the audience in the site-specific space at Testbed 1, is realising how the experience of the production itself leads to specific decisions.  Because there are no assigned seats, and the audience is free to move through the space, sitting or standing as they wish, their view of the events in the play is determined (quite literally) by where they stand.  You can be close to one of the stages, intimately engaged with the scene - or you can take up a perch on a distant sofa; or remain in the first space, seated at a regimented table, deliberately detached from the unfolding action.  You can lean on a pillar, sit on the floor, or move so that your viewpoint changes during the scene.  And all of this is political.

I hadn't planned this.  I had thought that the audience would essentially move in a block between spaces - but what in fact happens is much more interesting.  There is a clear awareness that the dynamics of the space as a whole encourage different types of engagement with the story - and this energy is disturbing and inspiring for the audience.  You become implicated in the piece's Middle Eastern resonance, whether by being detached or by being fully engaged.  The play in any case problematises Achilles' "liberal" stance as the man from the invading force who refuses to fight - and this knocks on into the audience.  It's a really extraordinary thing - and it could only happen in the form of live theatre.

Sunday's show will add to this, when "Two Schmucks, Three Opinions" (blogged here a few months ago) gets presented as a 12 noon show with lunch before the 4pm performance.  It's a fantastic way to approach the debate!
Posted by Michael Walling at 12:19 pm 2 comments:

Ramallah audience acclaims "This Flesh is Mine" 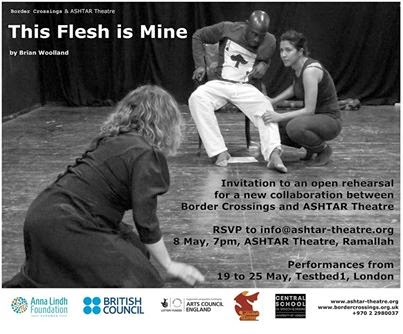 Here are a few responses from the audience in Palestine for our previews of This Flesh is Mine.

"Incredible.  I'm speechless in all honesty.  My heart was racing throughout the entire thing.  The emotion was overwhelming.  Tremendously inspiring."
"I loved this play.  It grasped my attention for every second."
"It had so many conflicts and the actors were more than perfect."
"It proves that mythology has been able to address human souls and dilemmas throughout time.  The performance was great."
"An astonishing mixing and understanding of both Israeli politics and the Palestinian mentality and behaviour."
"It is really great to see English and Palestinian actors work together with the source of the great Greek theatre.  We need more co-operation in the future."
"It was treasurable, modern and creative.  The actors were astonishing.  Actually, this is the first time I visit a theatre so I'm happy."
"I think that the play links with our situation in Palestine.  Particularly when it comes to fighting and power relations.  You bring an old story and tie it with the issues of the world nowadays."
"That was the craziest f***ing thing I've ever seen!  Loved the modern elements as the play went on.  Seriously you guys were amazing!"

Posted by Michael Walling at 5:28 pm No comments: