A Season in the Congo

I've wanted to see Aimé Césaire's extraordinary play for years - so I was very excited to see it announced at the Young Vic, especially with Chiwetel Ejiofor in the leading role of Congo's first post-colonial Prime Minister, Patrice Lumumba. I wasn't disappointed.  He gives a brilliant, multi-faceted performance at the centre of a thrilling, complex and provocative production.

But you know that already from the reviews.  I don't disagree with them at all about the terrific central performance and the thrilling production.  Where I do part company with the consensus is around what it all adds up to.  Ejiofor's performance is so very powerful that critics have tended to read the play as "The Tragedy of Patrice Lumumba", and to treat the central figure as a martyr for post-colonial independence.  This seems to me to belittle the play, which actually takes quite a sceptical position with regard to Lumumba's idealism, charisma and rhetoric.  When we first see him, he is selling beer - and the play continues to associate him with various forms of intoxication; including the sexual, when he's seen in a sleazy bar, and above all the politically romantic.  In a way this is self-criticism from Césaire, the apostle of négritude,  and that's perhaps what gives this drama such intensity and makes it so disturbing.

The fact that the critics (and some audience members) haven't quite "got" this is partly to do with one production decision.  In general, the piece is superbly directed by Joe Wright, but to my mind he's made a mistake in casting Kabongo Tshisensa as the Likembe Player.  Tshisensa is a compelling presence, and it's lovely to hear him speak in an indigenous Congolese language - but the effect of this is to make him distant from the audience, as his words have to be translated by other actors - the first time, by Ejiofor himself.  So the English-speaking actor, the translator, feels closer to the audience than the Likembe Player.  Now, the role of the Likembe Player is to mediate between the audience and the drama - he is a storyteller and a commentator in a Brechtian style, albeit using a proverbial African mode of speech.  So he has to feel close to the audience, and in that way serves to distance Lumumba, allowing us to view him in a more sceptical light, and not to identify so fully with his idealism and passion.

It doesn't stop the play feeling terribly immediate and pertinent, though.  After all, it's about a democratically elected leader whose ideology is at odds with that of the dominant West, and who is therefore deposed by a US-backed military coup.  This as we watch the slaughter on the streets of Cairo....

Posted by Michael Walling at 6:01 pm No comments: 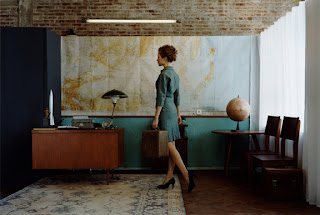 In many ways this is a response to the collapse of the grand narrative - both in terms of the end of Communist ideology in the East and the failure of late capitalism in the West.  It also suggests a kind of post-traumatic numbness - I was reminded of it as I watched the Guatemalan film Polvo that evening.  This is a "real" film, but again the narrative is fragmented and difficult for the viewer to re-construct.  As if the experience of genocide no longer allows the characters to live in a way that "makes sense" - either to them or to their implicated spectators.
Posted by Michael Walling at 4:27 pm 2 comments: 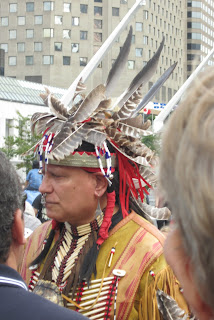 Last year, at Planet IndigenUs, I was lucky enough to meet André Dudemaine, an Innu man from Montréal, and director of the Festival Présence Autochtone there.  We'd actually known of one another and corresponded for longer - André wrote a piece on Alanis Obomsawin for our first Origins Festival programme - but meeting in person is always a big step forward....  and our discussions in Toronto led to my being invited to André's festival last week.

Unlike either Origins or Planet IndigenUs, the Montréal festival focuses primarily on film, which happened to be very useful to me, as we're coming to the end of programming Origins 2013, and the film programme is now the last bit of the jigsaw.  It meant that there were some serious experts on indigenous film around - I was able to spend time with Jason Ryle, who programmes ImagineNATIVE, and Elizabeth Weatherford, who heads the film section at the National Museum of the American Indian in New York.  It's one thing to get your own impression of a film at a screening - it's something else to discuss it with people who have that depth of knowledge.  They also proved the ideal companions to sample one of the Festival's other innovations - indigenous gastronomy....  The six-course tasting menu convinced me that food is not only central to First Nations culture, but is also an art form in its own right.  I've been thinking about ways of bringing food to the centre of our own festival -  and this approach helped the thinking!

The trip was also a chance to renew our relationship with Canada's extraordinary National Film Board: an organisation which has been leading the way in film for years.  I discovered on this trip that they developed synchronised sound and IMAX technology...  But what is really important about the NFB is its democratic function.  It gives a solid base for remarkable film-makers like Alanis - and allows them to be publicly funded in order to criticise the government and the society.  That, Ms. Miller, is what public funding of culture should be all about.
Posted by Michael Walling at 5:44 pm No comments: