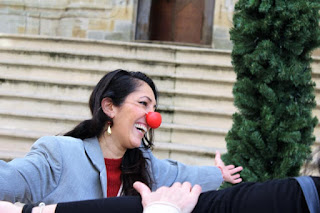 During our time together in Potenza I was massively impressed by people being willing to explore, learn and grow with such commitment and trust. I was especially inspired by the learning opportunities provided by combination of professionals in the room, from nurses, to engineers, to architects and youth workers. The unity we felt as a group so very quickly, has made me think of past workshops run cross-discipline and how they failed and faltered, through giving space to too much talking and debate. I for one am guilty of all too often hiding behind the power or distraction of words and failing to embrace the power and precision that communicating non-verbally can manifest and this week was just the reminder I needed to re-wire a touch and refocus elements of my practice.

Since undertaking the training, I have used several of the games we explored during out time in Italy, one of favourites being Ha Ho Hee, which I managed to deliver with 80 young people in one go in Egypt, in a prison with 10 category A offenders and at a 60th birthday party in Ireland. What I loved about this great opener was that it provided a wonderfully powerful physical way of either expelling or gathering energy depending on group or individual needs. I have used this game to invite people to pass on good energy across the circle or rid themselves of their nerves through the clear and strong movements and the bold sounds of the ha, the ho and the hee. Within each of the above examples groups were calmer and more focused having played the game.

When in facilitator mode I often find we can over-explain things that are far better communicated through doing and feeling, as opposed to lengthy verbal instructions. The training in Potenza helped me to reflect on how to incorporate less words in to my facilitation. This came in very handy in my most recent facilitation in Egypt, with large groups of young people. Drawing on some of the nonverbal approaches, I found myself resorting to clear and simple nonverbal cues in place of lots of over-explaining and unclear gesticulation.

My time in Potenza was one the hardest weeks of training I have ever experienced. While I took away a heap of great activity ideas and learnt a lot from the practitioners I met, I went on a challenging personal and professional journey during the sessions. This training taught me to remember the value of letting barriers down – something I do not find comes easy- to be ok with things going out of ‘control’ from time to time – a challenge to a perfectionist, to keep things simple – tricky when you feel the need to cover all bases and above all to be ok with failing and things not working out... In fact this is where the clown thrives, working with the problem instead of around it or away from it….  Speaking of which I don’t think I found my clown this time around but I am OK with that.

Something which came flooding over me after our day out in Matera, interacting with unsuspecting members of the public, was the quality of genuine connections and the sheer volume of compassion in this group, something I found utterly overwhelming - juxtaposed with the disheartening consideration of the absence of connection and compassion in so many aspects and elements of day to day life in this complicated world. I will be making it my mission to play Secret Angel with so many of my groups to come - what a wonderful and touching way to encourage people to connect and consider another being, to observe them and think about how they can silently support them, one small way to combat some of the tough stuff we humans go through…. Powerful.
Posted by Michael Walling at 6:38 pm No comments:

NATIVE at the Berlinale

The Berlinale is extraordinary.  A documentary about a Maori woman who herself made documentaries, directed by her son as his first film, might just about squeeze into the London Film Festival in a small venue for what is perceived to be a “niche” audience.  At ORIGINS, we would put it into an intimate cinema and focus on the debate it provokes.  At the Berlinale, MERATA: HOW MUM DECOLONISED THE SCREEN was shown on a Saturday night on a gigantic IMAX screen to a packed cinema, and was followed by a long and effusive Q&A.  The indigenous film-makers continually expressed their thanks to the festival for giving them such an empowering platform, and the audiences for coming in such numbers.

But then, Berlin is a genuinely international city.  I don’t mean that it’s intercultural - it’s less diverse than London or Birmingham - I mean that it sees itself as a space engaged in the global exchange of culture, people and ideas.  Pretty much everyone speaks fluent English, which is the main language of the Festival.  Nobody resents the “Other”.  People are eager to learn and to engage with ways of living very different from their own.  As we prepare to fall off the cliff of Brexit, we should look to Berlin as an example of how we can improve ourselves as a necessarily cosmopolitan society in an intimate global space.  I hope that ORIGINS can contribute to this: the need has never felt more urgent or more extreme.

MERATA was one of two films made by emerging directors about their inspirational mothers.  The other was SHE WHO MUST BE LOVED, by indigenous Australian director Erica Glynn, about her mother Freda, who was a pioneer of indigenous media.  About half way through the film, Freda mentioned her youngest son, Warwick.  A bit later on, she mentioned that she had been briefly married to a certain Bob Thornton….   It was only at the end of the film that Warwick Thornton himself appeared, collecting an award at the Sydney Festival and saying that he owed his film-making success to his mother.  Both the films made it very clear how the close family ties in indigenous families can generate an immense cultural energy.

I was also struck by how little of the ego that characterises Western directors was present in the NATIVE presentations.  VAI, the opening feature, was directed by nine indigenous women, each presenting a ten-minute vignette, portraying a woman called Vai (meaning “water”) at different stages of her life.  They weren’t actually the same woman - she could be many ages in the same era, and moved around the islands of the Pacific - but they were like the same woman, with other people in her family always having the same name, even if their personalities were very different.  Vai, water, flows between Polynesian people and binds them together across the vast Ocean.  And, like this story of common cultures and continues regeneration, the very process of film-making suggested a community approach that puts aggressive individualism in the shade.
Posted by Michael Walling at 5:16 pm No comments: