I've been in South Germany for the last couple of days, at the invitation of the Karlsruhe Staatstheater.  It's an incredible institution to run up against if you are part of the British theatre scene.  Karlsruhe isn't a huge city by any means - but the theatre (typically for the main theatre in any fair-sized German town) is on the scale of our national companies.  It has three auditoria, and employs over 800 people in its full-time theatre, opera and ballet companies.  It also has a thriving community theatre programme, the Volkstheater, whose participants perform on the main stages in the building, under the guidance of professional creative teams.  It was this part of the organisation that put together a three-day conference on how theatre can respond to the refugee crisis, and I was asked to speak as part of a series of presentations on "International Positions".

It's interesting to see just how sudden the shift to a multicultural or intercultural mode of being has had to be in Germany.  I'd been in Berlin a couple of times in the last few years and thought it very cosmopolitan - but that's not been the case in much of the rest of the country.  Angela Merkel's decision to open the borders to refugees has had far-reaching effects.  Some of the people I met said that it was unprecedented, uncharacteristic of this most pragmatic politician, and morally essential.  Others wondered whether there might not be a different agenda: Germany's population is ageing rapidly, and needs an influx of younger workers to sustain it.  Either way, the demographics of the country are changing very quickly.  Much of the the work we have been doing in Britain for decades, slowly and meticulously with many a setback, they are trying to do very quickly indeed.

Partly for this reason, and partly because of the better funded, more institutionalised  nature of German theatre, the bulk of this cultural work is emanating from large public organisations like the Staatstheater.  This has many plus points - for a start, the salaries of the professional people involved are there as a given, and they have solid and experienced administrative back-up in place.  But there are negative sides to it too: the work feels very top-down, with the projects (many of which are very engaging on their own terms) fitting a pre-conceived agenda.  You can see it in the conference plan: Day 1 discussion of policy, day 2 presentations of theatre projects, day 3 seminar on how to get refugees into the German jobs market.  Of course there's much about this that is practical and positive - but the role of theatre as a democratic space to re-imagine the city and the nation in dialogue with its "new citizens" (as they are pleasingly known) doesn't get much of a look-in.

The most exciting conversations are with two men from refugee backgrounds.  One of them, Ali Kareem, is another of the international presenters.  The organisation he represents, Teatro di Nascoto (Hidden Theatre) is a Boalean organisation from Italy, with a long track record of refugee work and a very direct engagement with political institutions.  He shows us images of performances in front of the Commission building in Brussels.  And he tells us a little of his own life - about his childhood in Iraq and the loss of his best friend in a car bomb attack.  This is what he does in performance, and it is deeply affecting.

The other refugee is Ahmed Shah, originally from Iran, who has founded both the Jugendtheaterbüro (JTB) and the Refugee Club Impluse in Berlin.  He's very excited that we have been working in Palestine.  In Germany, he tells me, everyone is very frightened to approach the Palestinian question, because the paranoia over being thought in any way anti-Semitic is (for obvious reasons) even more extreme than in Britain.  "While you were talking" he says, "I wanted to say: 'Can you hear this?  Can you hear this?'"
Posted by Michael Walling at 12:48 pm No comments:

Voices of Culture - Statement on the EU-Turkey deal 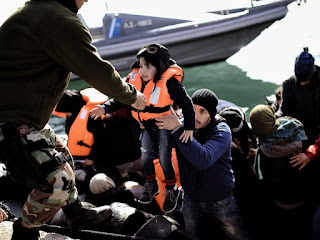 “We the undersigned join the Council of Europe and other international human rights NGOs in denouncing the EU/Turkey Agreement of 18 March 2016, as illegal under European and international law.   We call on the EU, the EP but especially our own Member State governments to make the strongest active efforts in the shortest possible time frame to honour the values that the EU upholds and to construct a policy and programme that can make Europeans proud rather than ashamed.”

The following members of the Voices of Culture Platform have co-signed this statement:

Posted by Michael Walling at 5:13 pm No comments:


Wednesday night saw the first screening of our film - Hidden Histories, Discovering Indigenous London.  There's a lot more to come on this - but I thought I'd just share a few audience reactions to whet the appetite.

“I think it was brave and extremely thought provoking. Asking us to acknowledge and play with difference in our work rather than ignore it and hold the "other" far away - masterful. I think the film says more about where we are not rather than where we are in our relations with Indigenous peoples. A lot of charity and not enough justice as one of the panel members so aptly said.” (Email from audience member)

“Incredibly thoughtful well put together and insightful programme. I learned a lot and think this will influence my perspective for a long time to come. Thank you!” (Audience Feedback form)

“It moved me as a person with indigenous heritage.  I would like to be even more involved.  Fantastic film.  I would love to show the film.” (Audience feedback form)

Posted by Michael Walling at 6:44 pm No comments: