The Coming of Totem Latamat

The story began back in  March, when we first approached Jun Tiburcio to make the totem. It was clear that this year's ORIGINS was not going to be the same as previous editions, with travel and audience gathering so uncertain. Indigenous people had been particularly badly hit by the pandemic, and this fact was also affecting the other great concern of 2021, the Cop26 summit on Climate Change.  As Greta Thunberg pointed out, vaccination inequality compounds existing divisions between rich and poor, effectively excluding Indigenous voices from the crucial debates in November. As a UK-based organisation working with Indigenous cultures, we felt a deep need to find another way in which their environmental ideas and agendas could be brought to the world's attention. TOTEM LATAMAT is the answer. 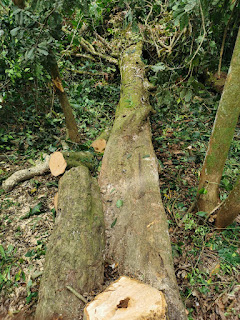 Accompanied by a ceremony to give thanks for the life that was being offered, a single tree was felled by Jun and other men from his village back in June. He carved it over many weeks, working with the entire community to shape the tree, to sculpt its intricate designs, to paint it in the magnificent, sun-kissed colours of Mexico. TOTEM LATAMAT is the work of a great artist - and it is also the work of his Totonac village community. 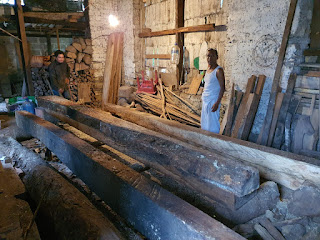 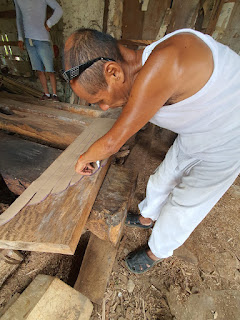 By early August, the totem was ready to move to Veracruz for shipping. It's not a simple matter... but we really couldn't send this by plane: the whole project has to be as environmentally positive as possible. We needed export licences and we're still doing import paperwork. The totem turned out too be too big for the 20 foot shipping container we had booked, so we had to get a bigger one. Then the queue of goods for the ship proved too long, and there was a two week delay before it could be loaded onto the next ship. Finally, on 7th September, it was able to begin its sea crossing. 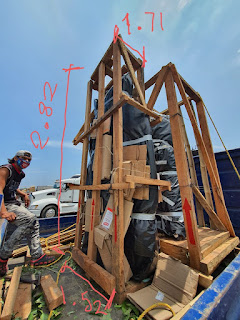 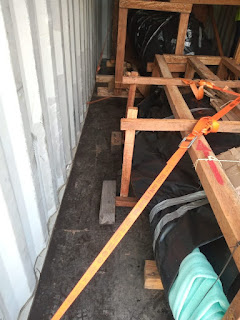 The ship stopped in Houston, and then Le Havre. Mid-Atlantic there was another delay that meant the ceremony of welcome had to be put back. Just this morning we heard the departure from Le Havre was 9 hours late, which means the ship will be unloaded overnight tonight at London Gateway. Then it's a question of how long it takes to get through customs. The shippers will drive it across London to Chiswick House, and at last we will meet TOTEM LATAMAT, for the beginning of the UK journey.
Posted by Michael Walling at 11:21 am No comments:

After seemingly endless Covid delays, and surrounded by vaccination certificates and antigen tests, we were finally able to hold the first workshop in the Cre-Actors project, run through our Irish company, in the last week of July.  I couldn't have wished for a better return to the world of live theatre-making: not only were we able to gather in a large intercultural devising group, we were on the main stage of La Cartouchrie, working with actors from the great Théâtre du Soleil itself.  In the image above, you can see Nicola Bonazzi, from the Teatro dell'Argine in Bologna, working in a costume from their legendary production of LES ATRIDES.  We were able, quite literally, to cover ourselves with the great theatrical tradition of this remarkable troupe.  It was deeply refreshing and restorative to reconnect with theatrical tradition, sensing a continuity and a dedication that has survived the rupture.  It was, in the fullest sense, a week in the sun.

The Soleil is famously a company which bases its work in mask; in the traditional forms of Asian theatre and commedia, in which the mask is a sacred object that carries the spirit of a pre-existing character.  While we made little use of actual masks in this workshop, there were costumes involved from the very beginning, as well as music in every improvisation, often used as the stimulus for the scenario.  The workshop leaders, Dominique Jambert and Vincent Mangado, also made use of the framework from THE TEMPEST as a stimulus to creativity, and I suppose that was like another mask - another tradition of theatre to inform our creativity.

There will be other posts about this week on the Cre-Actors blog, and detailed discussions of the methodology in the project e-book next year.  But at this point, I simply feel a desire to celebrate a return to theatre-making, and to express the joy of being part of the traditions that come together on the Cartoucherie stage.  It is fun.  It is holy.  It is political.  It is community.

Posted by Michael Walling at 2:26 pm No comments: