A week in Berlin 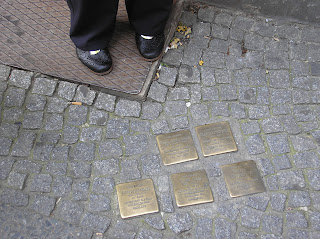 Just got back from a fascinating week in Berlin, courtesy of the EU's Grundtvig Programme, who funded me to do what they call "In-Service Training" with an organisation called the Comparative Research Network, looking at interculturalism and cross-community dialogue.  CRN is an academic set-up, largely run by geographers, but the workshop was very practical, indeed very theatrical, in its approach, and pointed some really useful ways of making use of theoretical ideas around cultural exchange.  Just the sort of thing we've been looking to develop in the community engagement side of the company.

Take the image above.  The feet belong to a Turkish woman, a first-generation migrant to Berlin, who lives in the Kreuzberg area of the city.  This is a hugely diverse part of the city, far from the conventional tourist trail, and it seemed strange to be led around in a tour group.  But the viewpoint and ideas of a local guide from a particular community enabled us to see the area very differently.  There is history everywhere you look...  even in Berlin's equivalent of Tottenham.  The little bronze plaques at her feet are miniature memorials to Jewish people taken to the concentration camps by the Nazis.  There are many of them along Karl-Marx-strasse.  She showed us her mosque, which is a converted Christian Free Church, a school where 90% of the pupils are from immigrant backgrounds, shop windows with clothes for Turkish weddings and circumcisions.  The city from inside.  A beautiful cultural reversal.

On the last day of the workshop, after presenting what we do to the rest of a very cross-disciplinary group, I found myself talking animatedly about how exciting it had been to take part in a workshop so specifically rooted in the city.  One year ago, I said, only a few yards from the Wood Green office, my own city had been in flames.  We have to address this disjuncture between living somewhere and regarding it as home.  We have to find ways for people to validate their London neighbourhoods as cultural spaces in which they are at home.  I still have to process the ideas from the workshop fully - but my sense is that they may point some exciting ways forward.

Posted by Michael Walling at 3:14 pm No comments: 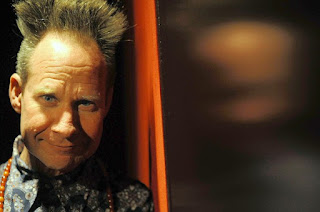 A fantastic evening at the Africa Centre last week, with our Patron, Peter Sellars, talking on the theme Dialogue with Africa.  It's the first time we've been able to include Peter directly in our work (apart from his inimitable programme notes and Foreword to the Trilogy book), and so a really exciting event for us.  We're in the thick of a whole series of Africa-related projects: Sunshine on a Rainy Day was great a few weeks back, and now we're doing a whole series of events with the Africa Centre for the Africa Salon - watch this space!  Alongside that, we're developing an arts and cultural strategy for Botswana, and a number of potential new theatre projects in a number of countries.  And there's written material about Shakespeare in Africa on its way.....

All of this coincided with Peter bringing his production Desdemona to the Barbican, where it performs next week.  I saw (or perhaps I should say heard) the piece last year in Berkeley, and thought it was fantastic.  Toni Morrison has re-imagined Othello in terms of Desdemona's after-life, and her dialogues with other dead, including Barbary, her mother's maid.  The name, in Shakespeare's time, meant "Africa" - and so Toni and Peter's idea is that Desdemona was brought up by a black woman.  This role, played by the great Malian musician Rokia Traoré, brings an authentic African voice into the production.  As Peter says, Shakespeare's Africa was exotic and imagined - today our engagement with Africa has to be real and human.  It's a very strong case for the kind of work we do: creative collaborations between artists from wildly differing cultures.  Peter explains that these are not simple things to engineer, but that is the "harsh reality of shared space".

I'm not going to blog about this at length, because the talk was videoed by the National Theatre archive for their new black theatre site, and we'll be putting it on our site too.  Suffice to say that a packed room hung on his every word: he really is the personification of passion when it comes to intercultural theatre.

Dare to be Different 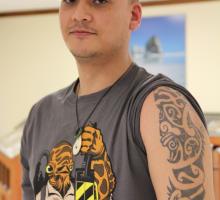 It's been an amazing few weeks here, with our Participation and Learning programmes going into overdrive as the educational year heads towards its close.  Joel and Gabrielle have been working very closely with the London Māori community to complete the Oral Histories component of our Heritage Project - and the website has now been launched!  Click here.  Once you're on the site, you need to register if you want to access the fascinating archive of interviews, which are there in both written and audio form, dealing with migration, Polynesian life in London, ceremony, lifestyle and change.  There's also a great video about the project, which shows people from the community discussing why this work matters to them, and young people from Malorees School who have been working with the London Māori.  And, the process, they all got their arts awards!

Meanwhile, down in Plymouth, I've been working with a group of young refugees and asylum seekers, known as Dare to be Different, who came to the city as a dispersal centre, and who come from places as diverse as Afghanistan, Sudan, Pakistan, Iraq, Angola, Russia, Congo, Sierra Leone, Zambia and Zimbabwe - and probably a few more besides.  Two months of workshops have explored their creativity, and have drawn off their experiences, their hopes and their dreams.  It's been a fascinating and inspiring journey - and it's culminated in a performance called Division which they've presented at the Drum Theatre.

What's very salutary about this group is the complex and fluid nature of the identities they are exploring.  In some ways, they are defined by their past and by their refugee status: they have fled from persecution, and many of them have lived through far more in their early years than most people do in a lifetime.  We had one very powerful session based around the participants sharing personal stories about how their lives had changed - and many of them were astounded by what others had lived through.  And so was I.  On the other hand, they feel an intense need to move beyond that restricted identity, and to create a new way of living in the new space they have come to.  They are young people, with much to give and much to expect; so they cannot and must not be defined solely by a past over which they had no control.  Division was a terrific piece of theatre, because it was able to include a sense of what had been left behind, or perhaps absorbed - but also a sense of the lightness, the comedy present in young lives, and the aspirations and challenges of living in a new space.

What's more, they were wonderfully eloquent about all this when we had a post-show discussion, and that discussion involved not only theatre people and friends, but also public figures like the police, the racial equality council and other public agencies.  In fact, this work became a study in how theatre can become an attribute of participatory democracy.  Something we are sorely lacking in our society right now.

Posted by Michael Walling at 3:34 pm No comments:

Ganesh, the Swastika, and the question of disability 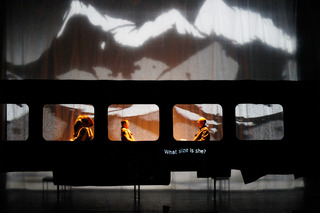 Back in February, I wrote a post about Back to Back's production Ganesh versus the Third Reich, which had been showcased at APAM.  I said then how important I thought it was - and I'd only seen half an hour's worth of the material.  Now I've seen the whole thing, and it is truly extraordinary.

There are two plays at work in this performance.  One of them is the story of Ganesh making a journey to Germany in an attempt to recover the swastika.  This story alone is complex enough, with beautiful stage imagery, multiple languages (there's a surprising amount of German), Hitler and Mengele, and a growing bond between the Hindu god and a fleeing Jew with "mental retardation".  The other half of the piece deals with the making of this piece, and shows the debates between the core actors in the company, who are perceived to have learning disabilities, and their (non-disabled) guest collaborator.  The bravery of the company in sharing this material is remarkable - particularly when it comes to demonstrating in a very visceral way the eruption of frustration which can occur in the intensity of collaborative work and the privacy of the rehearsal room.  The games with the language of theatre create a sense that these scenes are a fiction derived from fact ("When we perform, there will be an audience in these seats" / "There is an audience").  When that fiction topples over into violence, and the non-disabled actor walks out on his colleagues, the dividing lines feel horribly narrow, and the attitudes of the audience are implicated.  What's more, because the backstage scenes constantly elide into the Nazi scenes, you are left with a sense that the deep prejudices of fascism are dangerously close to the assumptions made in our own society.

It's incredibly upsetting.  It is also very funny.  And it is work of incredible intellectual insight and sophistication.  By people who are usually regarded as having very little ability in that area.  How wrong we always are when we seek to label.
Posted by Michael Walling at 6:38 pm No comments: