In my post looking back on 2020, I speculated that our work (and perhaps the whole form of theatre) would not simply go back to the way it had been prior to the Covid-19 pandemic, but would continue that year's exploration of new forms more suited to our rapidly changing world. What I had not expected then was that 2021 would pass without us being able to present any actual 'theatre' at all - or that I would find myself at the end of this year putting the very word 'theatre' into inverted commas. The form itself seems questionable, unstable. Some companies have, of course, been able to perform in 2021, but they have done so under constant threat of closure, and they have usually been able to do so because they were building-based. For us, there remains very little point trying to plan a production in a conventional performance space, while access to those spaces remains so unpredictable. And so we continue the process of enquiry begun last year, examining how our work can and should evolve in the capricious context of our troubled times. This isn't just about the pandemic, either. Covid has brought into sharper focus two major issues which were already informing our art, and which are now emerging as its core themes. One of these is the existential threat posed to the planet by climate change. The other is the ongoing prevalence of colonial structures, both politically and culturally, which stand in the way of equity, justice and democracy. For the foreseeable future, our work will centre on these three themes:

On one level, these are all the same theme. They are all to do with the choking dominance of capitalist structures across the world, and they are all to do with loss of breath. Covid-19 attacks the breath; Climate change contaminates the air we breathe; Colonialism cuts off the breath of life from those whose humanity it denies. As George Floyd was choking to death, he managed to say "I can't breathe". 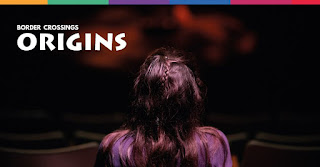 Thinking through these key themes has enabled us to create a very different version of the ORIGINS Festival for 2021-22. It was clear from the beginning that we would not be able to programme our usual two weeks of visiting performances in the summer, and so instead we looked to a full year of programming which would bring Indigenous cultures into a direct dialogue with our own society in Britain. We began with online events, building on what we'd achieved in THE LOCKDOWN DIALOGUES of 2020. The Opening Event was online, and included a performance of Yvette Nolan's KATHARSIS - a play written in response to the pandemic and the closure of the theatres, performed in the deserted auditorium of Winnipeg's Prairie Theatre Exchange by Tracey Nepinak. 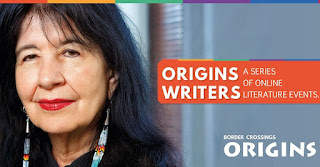 During the spring, we worked with our friends at Beyond the Spectacle to present ORIGINS WRITERS: a series of online literary events, using dialogues with leading Indigenous writers like Joy Harjo (the US Poet Laureate), Natalie Diaz and climate change expert Kyle Whyte to locate ourselves in relation to our themes and to the importance of Indigenous voices to all three. Many of the talks are still available as recordings. This online presence grew with film screenings, including ETCHED IN BONE and UNDERMINED with the Menzies Institute, VAI with Aya Films, and a fantastic evening of short films relating to Animism. We also presented our first online exhibition, featuring Indigenous Taiwanese Women's Art, and partnered with Woolly Mammoth in Washington DC to show an online version of Madeline Sayet's WHERE WE BELONG, which had been such a success at the Globe in ORIGINS 2019. Never shy of controversy, we set up a debate around the film LEPAGE AU SOLEIL, confronting questions around representation and engagement between European and Indigenous cultures. All this online activity provided the cultural and political context, the vital Indigenous presence, that enabled us to undertake live work in new forms. So far, the most significant of these has been TOTEM LATAMAT: carved from a cedar tree in Mexico by Totonac artist Jun Tiburcio, shipped across the Atlantic and journeying through the UK to Glasgow for Cop26, the Totem became a focus for ceremonies and performances they responded to its ecological message wherever it went. Some of these were quite formal: like the Indigenous Fire Ceremony in Glasgow or the Return to Earth in Dumfries. Others were more spontaneous, arising from local communities, like Chiswick School in London or the Milton Keynes Interfaith group.  Early in the New Year, we'll be releasing a film that documents this extraordinary journey - so I won't say more here, except to emphasise that this was every bit as much a performance project as it was a visual art commission. 2022 will see more work like this, engaging directly with communities through Indigenous cultural forms that catalyse their own responses to our key themes, and to the need for change. As our Patron Peter Sellars said in his LOCKDOWN DIALOGUE, we need to think more specifically about the local, partly because the pandemic requires it, and partly because that is where regeneration, both cultural and ecological, can and will occur. One such project that is already underway is BOTANY BAY: a 14-month programme working with schools and heritage partners to explore the Indigenous heritage of horticulture and food production, creating new gardens which will offer healthy and sustainable models of reciprocal exchange between our communities and their environments. 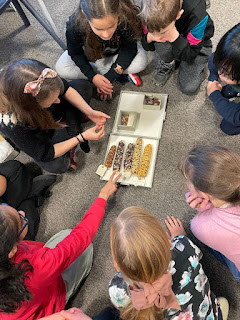 We were already beginning to undertake work of this kind before the pandemic, of course, and its enhanced significance does not mean that we are abandoning theatre. Not a bit of it. As with TOTEM LATAMAT, performance will actually be central to BOTANY BAY, and to the other forthcoming ORIGINS work. I am very hopeful that the Festival will climax with a visiting theatre production, and that the different strands around ceremony, ecology and rebalancing after colonialism will come together in a new piece we're developing with the support of Birmingham's Commonwealth Games Festival 2022. What it does mean is that we are questioning the form more profoundly, developing how it can work in relation to shifting ecologies and histories, balancing our community and international remits. It's therefore really helpful that, through Border Crossings (Ireland) we are undertaking two European strategic partnerships that allow us to exchange good practice with extraordinary partners overseas.  One of these looks at the Third Space as a model for community engagement: the other, CRE-ACTORS, is an exploration of intercultural devising processes.
It was CRE-ACTORS that found us, in July, working for a week in Paris on the stage of the Théâtre du Soleil, at the Cartoucherie de Vincennes. As our colleague from the Teatro dell'Argine in Bologna, Micaela Casalboni wrote: "Being on the sacred stage and spaces of Théâtre du Soleil was the dream of many years in my life as an actress and as a theatre maker interested in arts for change – individual, cultural, social change. Admiring the painted walls, the paper lanterns, the costumes, the scenes, the behind-the-scenes, the spaces for theatre and the spaces for the group (the kitchen, the courtyard, the space for the kids…) was not only exciting but moving. Especially after the toughest years that we may remember in our life of individuals and theatre makers, years of closed theatres, years of distances, years with no bodies sharing the same physical space." This celebratory, creative week really did seem to offer a way forward - and we were all incredibly excited to return to Paris in December so as to see the Soleil's new devised piece: L'ILE D'OR. And then Covid swept through the company, causing the shows to be cancelled, and through our different countries, with new travel restrictions. As the year ended, there was still no stability to be found, least of all for theatre.
This year dominated by disease has seen many sad losses to the world of performance - not all from Covid, of course. Helen McCrory, Antony Sher and David Gulpilil are three that particularly hit me: all truly great actors whose presence on stage or screen was an object lesson in what we do and why we do it. Our own circle was not exempt, so let me end this year with tributes to three great friends, each of whom contributed profoundly to the story of Border Crossings: 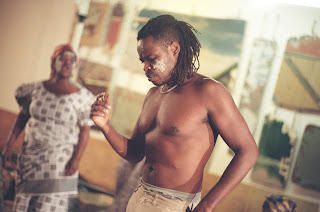 Posted by Michael Walling at 4:24 pm No comments: