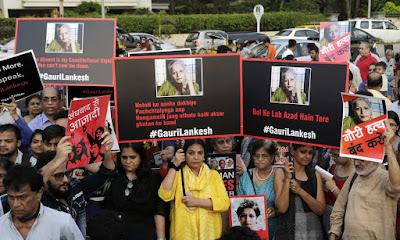 Some twenty years ago - in what now seems a more innocent, humane, compassionate time - I spent several months in the Southern Indian city of Bangalore, directing THE TEMPEST for Mahesh Dattani's Playpen company.  It was a life-changing experience for me, leading to the creation of Border Crossings as a company committed to intercultural work; and I believe it was also an important production for the cultural environment in which it took place.  One of the great pleasures of that time was to be surrounded by an extraordinary group of creative, committed and questioning young Indians - actors, writers, artists, film-makers and journalists. Young people who cared about what was happening in the world, who understood the historical forces that had shaped and were shaping their country, who longed for justice and who believed they could make a difference.  For a short time, I felt as if I was one of them - and that sense of hope has remained with me ever since.  From time to time I have seen or exchanged emails with many of them.  I still do. We have all retained some sense of the young people we once were and have clung to the dreams we once dreamed.

Central to that inspiring group of people was the journalist Gauri Lankesh, who was murdered last week.  The three men who shot her as she arrived home from work have not been traced, and there is no definite proof of who they may have been - but those who knew her well are convinced that her death must have been related to her fierce and honest journalism; and to her activist stance against the power of Hindu nationalism, against the racist ideology of the BJP and its vigilante offshoots, in support of equal rights for the Dalits and the Muslims.  Mari Marcel Thekaekara's Guardian piece deals with the politics very well.  The Hindu right has been given free rein to enact its own idea of justice, and Narendra Modi preserves an ominous, acquiescent silence.  In what claims to be the world's largest democracy, mob rule is permitted.  Have we any idea of just how dangerous our world is becoming?  We stand on the edge of an abyss.

I remember Gauri as a young woman - energetic, attractive, full of wicked humour.  She liked to be in the thick of controversy: the piece she wrote about me in the magazine SUNDAY responded to the way that THE TEMPEST had divided opinion so deeply, with some people embracing its Indian setting and the post-colonial resonances, while others steadfastly refused the connections.  It wasn't a pre-publicity piece: Gauri sought me out after she had seen the piece, precisely because she wanted to engage with the anger it had provoked from conservative voices.  I don't think any of us realised that this cultural controversy was symptomatic of something so much more dangerous, so much more vindictive, something that would become so bloody and so tragic.

Gauri was killed because she dared to speak the truth, and her death makes it all the more incumbent on the survivors to continue that moral quest.  The voice of justice must not be silenced.  It must not.