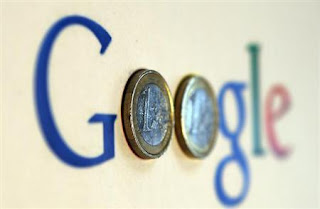 It doesn't even need very much.  A derisory offer once a year from Google would put us back where we were under Labour - which now seems like a bit of a golden age.
Posted by Michael Walling at 9:01 pm No comments:

The year that has just ended was in many ways a very depressing one for anybody involved in intercultural dialogue and progressive politics.  The institutionalised terror of Daesh, particularly as made manifest in the Paris attacks, underlined the total failure of the West to build bridges with the Islamic world.  The response has been simply to escalate the cycle of revenge and confrontation: anyone who seeks to understand why these things are happening is castigated as somehow sympathetic to mass murder.  At the same time, we are witnessing an ever-growing humanitarian crisis, and the British (and European) inability to respond in any but the most narrow-minded and divisive terms is pitiful to behold.  Nicholas Winton, who died in 2015, showed how a civilised society should respond to the spectacle of desperate people fleeing from persecution and death.

The other great crisis, Climate Change, was the subject of yet more self-interest and short-sightedness on the part of the governments of "developed" countries, in the Paris trade agreement that they claimed was an Environmental treaty.  In spite of a huge presence and intense lobbying by indigenous peoples, the voices of cultures with real environmental understanding were entirely ignored, passed over in the interests of capital.  Humanity's failings this year leave me wondering how many more years there will actually be.

And yet, during our work this year, I have time and again felt a renewed optimism and a sense of change in the air.  The Origins Festival during the summer was the largest gathering of indigenous peoples in London ever, with truly extraordinary work on show, and a real feeling that the time had come for these formerly oppressed cultures to reassert themselves in the global space.  The festival embedded itself into the city more deeply than ever before, with entire schools coming off timetable to take part, the British Museum being shaken by the ancient rhythms of Torres Strait dance, and open spaces being regenerated through the healing rituals of the Voladores de Papantla.  The Festival also included the two most important pieces of theatre I saw this year - hopefully I can say that without sounding too arrogant, as we didn't make them ourselves, but curated them!  Oxlajuj B’aqtun, by the Guatemalan Maya company Grupo Sotz'il, was actually about the change in the Mayan calendar, and their sense that a new period of history is slowing coming about, one that will see a more environmentally aware, just, and egalitarian society.  Beautiful One Day, by Australia's Ilbijerri,  placed current cross-cultural tensions into a longer historical perspective, and offered the long view of the Elders as a way of looking not backwards, but into the future.

That same spirit has been informing our Heritage work over the last few months, with the development of our Oral History archive around the indigenous presence in London.  2016 will see our first documentary film, on this same subject.  It's an exciting development in our work that we are collaborating so much with Museums and historians - many of our projects in development are about reclaiming forgotten histories and so re-imagining potential futures.  It's an approach close to the heart of everyone at Border Crossings, including our Patron Peter Sellars, whose talk at Rich Mix was a highlight early in the year.

2015 also saw us developing a new play with Brian Woolland - a sequel to This Flesh is Mine, which had a rehearsed reading at Salisbury Playhouse in the autumn.  Entitled When Nobody Returns, this play will be the Odyssey that follows our Iliad.  After the war, there come the stories of returning soldiers, of displaced people, of broken relationships, of lands occupied and peoples dispossessed.   Our plan is to work with our partners at ASHTAR Theatre in Palestine to present the two plays in rep during 2016 - so look out for an inspiring and important response to all that is happening in, and emanating from the Middle East.

2016 is also Border Crossings' 21st birthday - and there are some very exciting celebrations being planned.  Like all times of trouble - this change of year is also a time of hope.

Happy New Year.
Posted by Michael Walling at 10:49 am No comments: