Sunshine on a Rainy Day 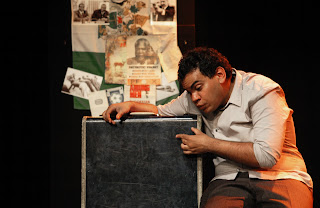 We had an amazing day on Saturday, kicking off an exciting new partnership with Chickenshed.  As Dave Carey said in his introduction to the day, it's odd that we should be on this theatre's doorstep, and it took an Australian living in Wales to put us in touch - but thanks to Ian McKenzie-Thurley for seeing the commonalities of interest.  We're all very keen that this relationship should grow.

Sunshine on a Rainy Day was a one-day festival of Southern African culture, held at Chickenshed to complement their play The Rain that Washes, and curated by us.  It's amazing just how much you can cram into one day, if you set your mind to it.  The morning saw two storytelling sessions for children, with Nyemu and Wedzi of World Musik Makers - a Zulu couple who are wonderfully charismatic, and incredibly committed to African culture.  Nyemu tells me that they are now letting out their house in Cambridgeshire to pay for the transportation of equipment to the school they support in Zimbabwe.

The afternoon started with Idrissa Ouedraogo's film Kini and Adams - a brilliant piece of work which shows relationships collapsing as a mining operation shifts the aspirations of a community.  There was a pretty strong discussion after that - and an even more powerful one in the panel session, Theatre for a Change.  I chaired this, with Arifani Moyo from the Indigeneity project, Christopher Maphosa (on whose life The Rain that Washes is based) and Kate Stafford from Bilimankhwe, who has herself been blogging about the day!  The discussion moved between theatre and politics, theatre for development, theatre and prison, theatre for and by children (in particular CHIPAWO in Zimbabwe), and to the very heart of the post-colonial debate.  It was particularly exciting for us to have the South African High Commissioner, Dr. Z.S.T. Skweyiya, and his wife in the room, and contributing very robustly to the debate.  There was also Dr. Ralph Mguni, the Secretary General of ZAPU, who is awaiting the fall or death of Mugabe before he returns to his Zimbabwean home.  Ralph spoke towards the end of our discussions, and made very clear the importance of cultural activism in the development of the post-colonial space.  For an organisation like ours, working at the interface between intercultural theatre and international policy, this was an inspiring afternoon.

The play, written by Dave Carey with Christopher Maphosa, and performed by Ashley Maynard (pictured) is a solo piece dealing with Christopher's own journey with ZAPU, which took him to Bulgaria with Joshua Nkomo, in preparation for the liberation of Zimbabwe, and then into a nightmare of oppression after the election of Mugabe.  Christopher came to England as a refugee, and his story again underlines the importance of cultural work with refugee communities - it was through working at Chickenshed that he once again found himself a home.  The theatre was packed, and the audience excited!

As if all that wasn't enough, we ended the day with a jazz concert from the great South African trumpeter Claude Deppa.  How exciting was that?
Posted by Michael Walling at 12:40 pm No comments: I should say that there is much about this production which is very strong - visually it is stunning.  But, because of the status it has been afforded in the World Stages season and the whole Olympic thing, it has a greater responsibility to its subjects in terms of cultural exchange, historical honesty, mutual respect and acknowledgment of complex truths.  Because of this status, it's getting glowing press like the Dominic Cavendish's review in the Telegraph which suggests that "it belatedly brings that vast country – and fast-emerging superpower – into our parochial modern theatrical arena."  Well, actually, no - Dominic.  Border Crossings produced Dis-Orientations; in 2006, and Re-Orientations in 2010.  Both of these were collaborations with artists from mainland China, which drew off their own direct experience of their history and their present.  And now we're working on Consumed, which will bring our journey right up to the present moment, while continuing to acknowledge the importance of the past.  Some of us haven't been parochial for a long time.  In fact, as long ago as the late 90s, I was working with Peter Sellars on Nixon in China at the ENO.  Alice Goodman's text really explored the many layers of the Cultural Revolution, and permitted no pat moralistic responses.
Posted by Michael Walling at 12:28 pm No comments: