The Origins festival bubbles on - and I'm now pretty close to getting a programme together. Funding the programme is another matter, of course.... but it's looking promising. The last few days have been about the First Nations work coming out of Aotearoa (or New Zealand, as it's commonly known!). I spent much of Wednesday with Ian Conrich at the Centre for New Zealand Studies at Birkbeck. Ian knows a terrifying amount about New Zealand film, and has suggestions for our film programme. I need to find a time to sit down and watch them. It's made easier by the fact that his Centre has every NZ film ever made but two in its archive.

It was also Ian who introduced me to Ariana Tikao; a Maori musician who was in London for a few days. We had lunch together. Ariana showed me the visuals for her new album Tuia, created by Louise Potiki Bryant. Louise also happens to be one of the key figures in the Atamira Dance Collective, a pile of whose DVDs had just landed on my desk. It's fascinating work - not so much dance as a meld of movement theatre, text, projected visuals and Maori ritual. The overall effect is the creation of a new form - a contemporary spiritual theatre which allows the indigenous traditions to speak in our time.

It reminds me of Lemi Ponifasio's wonderful Requiem, which Peter commissioned for New Crowned Hope. It's also like the work of The Conch, which I saw last night at the Barbican. This piece, called Vula, placed Pacific Island women (and one Maori) in a huge pool of water, which became a space for the celebration of the feminine in those cultures. It was, again, a very beautiful piece of ritual theatre. There's clearly a movement coming out of Aotearoa: a movement which is partly about recognising indigenous cultures, but which is also about that key thing - the way indigenous cultures can give us a route back to the spiritual theatre.
Posted by Michael Walling at 10:57 am No comments:

Dzifa sent through a very comprehensive, and fascinating, report on her time with us. With her permission, I'm going to quote a chunk here on the blog, because it raises some really interesting issues about intercultural theatre practice:

"In my mid-term report I mentioned that I would investigate British actors’ seeming concentration on head and voice as against involvement and control of the whole body when performing on stage, (which is what I have been trained to do). I asked about this at the drama department of the University of Plymouth, at the Barbican Theatre and also at the Drum Theatre, all in Plymouth, and indeed, in other places that the programme had taken me to. The most probable of the reasons I had been given came from the movement director/teacher, Anna Morrissey of the Royal Shakespeare Company. Her view is that ‘it could be a class thing’. She believes that those in theatre are middle class, and those who go to theatre are also middle class; the middle class and perhaps the upper class tend to favour ‘stillness’, even if this is unconscious. ‘It’s like two middle class people talking to each other, they look each other in the eye, and that’s it’. She added that they train actors to control the use of the hands.

The cultural/class thing made a lot of sense to me. I agree with Anna Morrissey on the issue of actors being trained to control the use of their hands on stage, because even with Africans who are usually very expressive and therefore tend to gesticulate a lot when they communicate, our performers are taught to recognize that once they get on stage they need to get out of the ‘natural’ and consider artistic beauty, aesthetic, and so control and employ only meaningful gestures. It makes sense also that people of different social classes would gesticulate differently even if they are speaking the same line; that is where actor’s put on characterization.

My cultural background and training make me see some British actors as a bit ‘stiff’ on stage. On the other hand the stiffness I see may be non-existent to people of British culture and social class. In this sense my expectations in actor training techniques have been a bit frustrated. Other exercises on correct breathing, voice projection and other general practices in actor training are similar, and so reassuring. On the whole, I consider it a great privilege to have been in rehearsal with the famed Royal Shakespeare Company; it has been a wonderful two weeks."
Posted by Michael Walling at 11:44 am No comments: 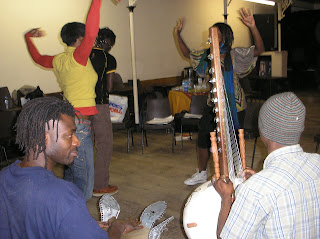 We were asked by a new African Arts organisation, called Aduna, to run a three-day workshop called "Artist Training" at the Africa Centre. I really had very little idea of what this would be like: all I could do was offer my theatre skills and practice, and see where it went. And it was a joy. Unlike Western artists, African performers don't categorise themselves over-much. So, although the room was filled with people calling themselves musicians, or actors, or dancers, or poets, the reality was that they were all creators and performers, and able to encompass a multiplicity of roles within that. So I was able to put a cora in dialogue with poetry, to set naturalistic theatre against dance, to make images with the body. Nobody seemed fazed by anything. And so, very naturally, a ritualised performance form emerged from the workshop, without my having to impose it in any way. As so often recently, I found myself thinking that Africa holds the key to a theatrical future - a form which is not confined by eonomically dictated specialisms, but which arises out of social and spiritual need.

Thinking like this, I went to see the amazing Molora at the good old Barbican. "Molora" is a Xhosa word for "ashes", and the play, which is based on the Oresteia, especially Libation Bearers, is dominated by death and mourning. But, by placing the myth in the context of the Truth and Reconciliation commission, it manages to avoid the inexorable cycle of retribution which Aeschylus postulates, without his dodgy solution of a male-dominated institutional justice. The chorus is fantastic - a group of traditional performers from the Transkei, all but one of them women. With their blankets and their songs, they remind me of the Chorus we created for Dilemma. In fact, I find myself thinking that this production in many ways echoes what we did in that play. The Chorus can still be real in Africa, in a way which is very difficult to find in the fragmented West. The voice of a community is so vital to theatre - and so tricky to articulate.
Posted by Michael Walling at 4:27 pm 2 comments: