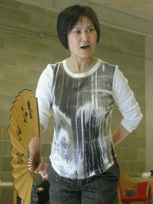 On Saturday afternoon, Ruihong gave a workshop on Yue opera. There was a small select band of enthusiasts in Riverside Studio 3, and beforehand she wasn't at all sure what she was going to do. We sorted out a DVD player so she could show some extracts, and hung the costumes on a rail so they could be examined. None of which proved necessary.

For an astonishing two hours, Ruihong simply talked through William and Haili's translation, revealing and sharing her deep love for the form which she has made her life. She would stand and move through the space, demonstrating different movement styles which might be appropriate to different character types. She sang for us in a whole range of yue styles (there are 13, apparently), even giving us old-fashioned and more modern versions of the same melody - the newer ones have acquired more vibrato, as a result of the influence of western opera. She sang as female and male characters - the female voice is in the nose, the male in the throat. And so on. We sat spellbound. How often in your life do you get such a privilege?

Phyllida Lloyd came to see the play yesterday, and was full of praise afterwards (like most people, actually!). Tonight, Ruihong and Haili are going to see Mamma Mia! Fair exchange....

There's more press, including a nice article in Sing Tao daily (Chinese community paper), with a nice quote from Ke Yasha: "Through his facilitation in the last two years, this China-UK collaboration has resulted in this innovative production. Michael Walling's unique perspective on the Chinese psyche, changes in attitudes and morality, and the ongoing changes in cosmopolitan Shanghai highlights how Westerners perceive China. This China-UK co-production has further developed cross art form and intercultural collaboration. It enables mutual learning and understanding; and promotes dialogue between China and the West."
Posted by Michael Walling at 11:20 am