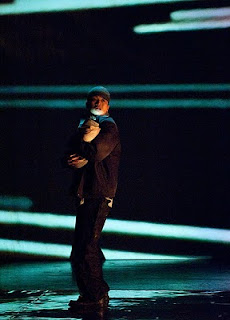 Reviews for Re-Orientations are really exciting - and so is the audience response. I hadn't realised until I saw the show at Soho just how funny it is!
Here are some quotes from the reviews and links:
"Deeply felt, powerfully performed, beautifully staged production" -Londonist

"Lives and cultures collide - sometimes violently - in this kaleidoscopic drama... intersecting stories set against a backdrop of hectic, often striking visuals.." - Times
"The visuals are stunning with video integrated into the action and choreography by French dance company a fleur de peau. I also love the way the company interweave different art forms and acting styes.... the company has also scored a real coup in engaging the talents of the great Chinese actress Song Ru Hui" - Theatreworld
"A two hour visual feast... Outstanding performances by Spatica Ramanujam with her exquisite comic timing and superb characterisation, and Qi Bai Xue's striking stage presence" - spoonfed.co.uk
There's only a week left to catch this acclaimed production at Soho Theatre before it tours to Shanghai and Sweden. Click here to book now!
Posted by Michael Walling at 4:43 pm