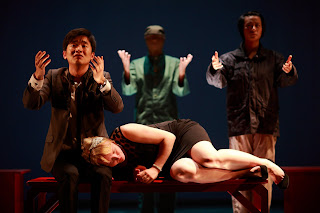 Well, it's been quite a year for us at Border Crossings! The production of Re-Orientations was a highlight, of course - especially the excitement of bringing the play to Shanghai, and the sell-out run there. It was the climax of two years' work - more, if you think in terms of the lead-in with the other Trilogy plays - and it truly lived up to the incredible work everybody had done to develop it.
We also ended the year on a high, with the Practice Exchange we organised with the Platform for Intercultural Europe. Very exciting for us to move into areas where we are dealing directly with policy. This has been a trend in our work for some time, not least in the Origins Festival. With another Origins planned for 2011, and the expansion of the Laboratory, we should be able to do a lot more to bring the arts into dialogue with policy-makers in the future.
One of the things enabling this is that, for the first time ever, we will have some revenue funding in place during 2011 to support a core staff. Thanks to the Esmee Fairbairn Foundation for this, and to the board, who have been so pro-active in developing the company to this point. We appointed our General Manager and Associate Director before Christmas, and I'll announce who they are in this blog and on the website once they are in post in January.
Elsewhere, the year has offered some exciting cultural experiences for me - though not that many of them in theatre, strangely enough. In the theatrical mainstream, I enjoyed the Cheek by Jowl Macbeth at the Barbican, and David Greig's not unrelated new play Dunsinaine at Hampstead. But my favourite theatre piece of the year, part of a very exciting LIFT season, was Life Streaming - which was hardly conventional theatre at all, but an online conversation with a survivor of the tsunami, sitting on a beach in Sri Lanka. Otherwise, my theatre highlights were actually operas, both directed by Richard Jones: Meistersinger in Cardiff, with Bryn Terfel, and Queen of Spades, which I saw in Houston.
The freelance job in Houston was also a big event for me this year - as much as anything just to get the chance to work with such an astonishing cast (Susan Graham and David Daniels to name but two). It also gave me one of the most profound experiences of the year - the Rothko Chapel. It was matched, in a very different way, by the powhiri given to Womad guests by the Maori of Taranaki in March.
In film, I'll confidently predict that Patagonia will be a big hit in 2011, and I loved the chance to watch The Baader-Meinhoff Connection on a plane!
In books, I particularly enjoyed Han Suyin's biography of Premier Zhou Enlai, Eldest Son, which I read in Shanghai. While I'm not totally convinced by her theory that China's embrace of capitalism represents the triumph of a policy Zhou was pursuing covertly throughout the Maoist era, she certainly demonstrates a surprising current of continuity running beneath the radical change. In the year a comic novel finally bagged the Booker, Ian McEwan's Solar failed to attract the expected attention, but I found it his strongest work since Atonement. Through farce and fury, it turns an acid gaze on our environmental myopia and emotional constipation. Dan Rebellato spoke at our Practice Exchange. His book Theatre & Globalization is an incisive, perceptive and witty polemic, which proves, among other things, that a loathing of near-slavery in Asia is not incompatible with eating sushi. He also provided another cyber-theatre event which lit up 2010, with his performance on Twitter during the Raoul Moat siege. So - how do we start to make intercultural theatre which relates to these new media?
Posted by Michael Walling at 11:12 am