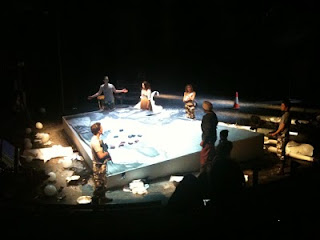 I've been on a semi-sabbatical from Border Crossings over the last few weeks (although I've still been having to do the financial reports for the EU through the evenings and weekends....), with Lance looking after the office and fundraising. I've been in rehearsals for Howard Barker's play The Europeans, which opened last night at the Unicorn. It's a final year student production for Rose Bruford - so it only plays four performances - two more today and one tomorrow afternoon. Which is a shame after five weeks of very intense rehearsals!
I've enjoyed working on the play very much - partly because the students are terrific, and partly because the text is fascinating. It's the second Barker I've done - the previous one was Victory, also at Bruford. In each case I've found that it feels horribly obscure when you first read it, but yields more and more depth, humour and energy as you go on. The Europeans is set against the background of the Siege of Vienna - so it's about a war between the Western powers and Islam... which is pretty relevant to us at the moment.... So we've found ways of setting the piece simultaneously in the 17th century and right now. Somehow it doesn't seem to jar at all.
The Unicorn is a wonderful space. The auditorium curves around a quite intimate downstage area, and then there is a huge open space behind. This means we can make some scenes very intense and others incredibly epic. It's as if the space breathes, moving between the public and the private. Like the Greek theatres.
Tony came last night, as did Carissa, and they both seemed to enjoy themselves! I also got to meet Gerrard McArthur, who is Associate Director of The Wrestling School. he said we had really found the style which Barker's work demands. So that was nice....
Posted by Michael Walling at 10:04 am