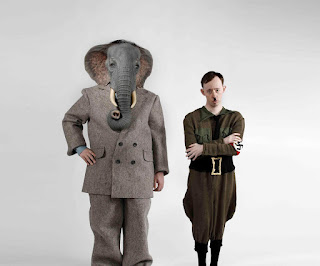 The other highlight for me so far wasn't to do with indigenous work at all - although it certainly crosses a great many borders in very radical new ways. This is a company called Back to Back, which is built around an ensemble of people who are perceived to have a learning disability. When I told Rachael Swain how powerful I found their work, she said that she thought they were the most important company in Australia - which, coming from her, is one hell of a compliment. Their piece is called Ganesh versus the Third Reich (there's a "versus" theme here....), and it deals with the Indian god's need to re-appropriate the swastika for its original, sacred meaning. The story opens up all sorts of debates about rights of representation and self-representation, appropriation, perception..... It's coming to LIFT later in the year, and needs to be seen.
Posted by Michael Walling at 6:41 am