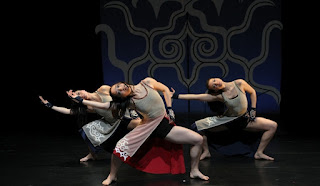 Hugely excited to be back in Toronto for the Planet IndigenUs Festival.  Like Origins, this is a festival of indigenous cultures from across the planet - though there are important differences too.  For one thing, this festival happens in a country which has a First Nations population, and so the connections which are made here are to do with those people welcoming their counterparts from overseas, and demonstrating a solidarity with them.  In London, the position is different - we are inviting people from around the world precisely because they have approaches to art and living which are very different from our own.

On a more mundane, but important note, Planet IndigenUs manages to be free, expect for a few ticketed performances.  One of these was Hone Kouka's play I, George Nepia - which pulls off the remarkable feat of being a gentle show about rugby.  Wonderful to see Hone and his company again after the wonderful Tu in Wellington earlier this year.  Wonderful also to reconnect with Pacific Curls, and with Marie and Rita from The Edward Curtis Project.  And I've only been here three days....

I got chance to share some of these ideas with Marc Merilainen, the Festival's Artistic Director, in a panel discussion about curating yesterday.  The third person on the panel was Dione Joseph, who is currently working with Big hArt in Australia - so it was another time of rich connections.  Marc had some fascinating questions about what makes an indigenous festival distinctive, how it relates to community and to activism, and what the future of such festivals might be.  All things which exercise my mind on a regular basis.

Still to come is a visit to the Harbourfront's partner venue on the Six Nations Reserve, and Kaha:wi Dance Theatre's collaboration with indigenous performers from Japan (yes - they come from the islands!) - called Susuriwka - Willow Bridge.  That's the show in the picture above.  Looks amazing.