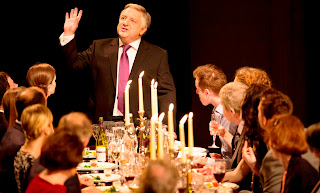 I went to see Timon of Athens at the National on Friday.  I doubt many other people there had seen the play at all - I have the dubious privilege of remembering two previous productions.  Jonathan Pryce played Timon for the BBC a very long time ago - and David Suchet did it at the Young Vic, with Trevor Nunn directing.  The Nunn-Suchet one was the production that made me think this really could be a very exciting play for the present money-obsessed age - and to keep suggesting it as a show I'd like to direct to American Shakespeare companies.  Needless to say, nobody ever rose to the bait.  Shame.

The timing for the current revival could hardly be better.  Financial crisis - and Greece getting the worst of it (I liked the irony of the production in the Globe to Globe Festival being by a company from Germany).  But Nick Hytner hasn't gone anywhere near Greece - his Athens is unequivocally London, with various iconic landmarks making appearances in the set, and hints at current movements, politics and even individuals (Tracy Emin is definitely the model for the Painter!).  The reviews have been glowing, and I expected this to be another moment like his Henry V at the time of Iraq, when Nick brings a bit of Shakespeare right into the present moment.  In the first half, he does.  Lots of it is quite jokey, but the jokes work - and when Simon Russell Beale is left alone on stage before the interval for the first blast of misanthropy, it is truly electrifying.  But the play, which becomes one long rant after the interval, doesn't allow this to be sustained. It's hard to see where any of it is going.

I've always felt that the most challenging element of the text is Alcibiades - and it's not a bad idea to equate his dissent with Occupy.  Really to pull it off would need much more textual doctoring, I think  - and more ensemble work.  The crowd acting is very "blocked" - you don't feel the mass movement.  When Nick ends the piece by having Alcibiades and his main cronies absorbed into the suited world of the bankers, it should be a cynical staging triumph - but somehow it isn't, because we don't really sense that there is anything to betray.

Alaknanda, who went with us, told me that Mike Alfreds (great and now overlooked director) is feeling very unhappy about the theatre in the UK at the moment.  Actors, he says, are just playing manufactured caricatures of themselves.  It was an interesting thought to carry into Kristine Landon-Smith's workshop on intracultural approaches to Greek drama, which she invited me to visit this morning.  Kristine was working with young actors from a very wide range of diverse backgrounds - lots of South Asians, with all the variety of that community today, and also people from (for example) West Country vicarages.  What was fascinating was the way she hardly bothered about "the character" or "the text" at all.  What interests her is the actor, the actor's imagination, the actor's voice.  Her way in to Greek tragedy was to place each actor in a situation they could relate to and perform in their own voice - and the situations were not necessarily even related to that in the text.  But, in the instances where the performers responded well, it was astonishingly freeing.  As in our own work, the key to interculturalism is for people to work from who they are - not to attempt to fit into some preconceived idea of what mainstream performance should be.

Posted by Michael Walling at 4:55 pm