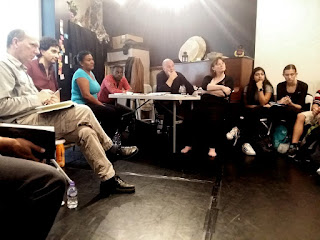 For the last four weeks, we’ve been locked in Exchange Theatre’s rehearsal space at London Bridge, developing our next devised production.  THE GREAT EXPERIMENT will reach the stage next year, and is already looking like one of the most exciting pieces we’ve ever done.  It’s part of our SEASON OF MIGRATIONS, and is rooted in the history of indentured labour – the huge movement of Indian workers through the British Empire in the aftermath of the abolition of slavery.  One of the best aspects of the month has been having no less than three expert historians visit us for several days each to help us get a stronger, more nuanced sense of the history.  Working together on the Research project “Becoming Coolies”, Crispin Bates is an expert on Indian history, Andrea Major on imperial history, and Marina Carter on the indentured labourers themselves, particularly in relation to the island of Mauritius, where the whole process really began.  Having them in the room took us way beyond the usual process of reading a few books and watching YouTube videos: they took us right to the archival sources – to the real words of people who had made the perilous journey across what they called the Kala Pani – the Black Water.

The creative team encountering this material included several of our regular collaborators, which also helped to make the process so rich – there wasn’t any need for introductions to ways of working or for overcoming trust issues.   Tony Guilfoyle (who was in both DIS-ORIENTATIONS and RE-ORIENTATIONS, as well as helping us devise CONSUMED) was back, as was Rosanna Lowe (Assistant Director on DOUBLE TONGUE), Nisha Dassyne (our Mauritian performer in MAPPA MUNDI and the translator of TOUFANN), David Furlong (another Mauritian performer and director at Exchange, who has been part of our recent training workshops).  They were joined by Mauritian visual artist Shiraz Bayjoo; and by the wonderful Rwandan actor Ery Nzaramba, who I first saw in Peter Brook’s extraordinary piece BATTLEFIELD.  The key was that all these performers work as writers, directors and visual artists as well as actors – something key to the whole process.

Amazingly, by the Friday of the fourth week there was enough material readily shaped to be shown to a small invited audience.  The response was astonishing.  This isn’t just a show about the history – it’s a show about how we relate to the history, how it reflects our contemporary realities, how it has made us who we are.  These aren’t easy subjects, but the company has been very brave in the level of personal encounter.  The resulting piece is going to be very delicate, very fragile, and, as a result, profoundly moving.

Posted by Michael Walling at 9:11 pm