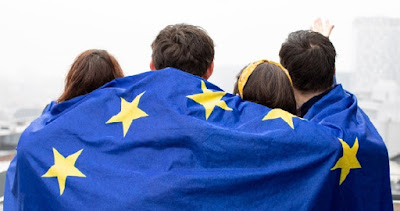 As my son and I took our permitted daily walk through Enfield yesterday, I felt as if I were on a film set.  The combination of street parties with social distancing was weird enough - combined with a fierce jingoism and a bizarre nostalgia for the grim 1940s, it seemed totally surreal.  I've been very disturbed in recent weeks by the rhetorical elision of Covid-19 with World War 2: the constant talk of the Blitz spirit (whatever that was); the evocation of Churchill; the way in which the war veteran Captain Tom Moore, wonderful though he undoubtedly is, became the symbol of our pandemic moment as he raised funds for the NHS, which is (incidentally) not a charity but a state service funded by general taxation.  The analogy is doubtless useful to maintaining morale, and I don't honestly begrudge people the chance to enjoy a scone and jam on a sunny Friday in the thick of a global pandemic - but the analogy is also nonsensical and frankly dangerous.  The virus is not a military enemy that might change its tactics if it works out what we're up to.  It is not a general or admiral who will surrender when the "fight" is over.  There will be no glorious moment of victory: like the world of Eliot's Hollow Men, this will end "Not with a bang but a whimper."

What makes the persistent use of the World War 2 analogy even more disturbing is that it has also been constantly employed in the Brexit debates.  This reached a new low this week, when a Daily Mail souvenir offer called VE Day “Britain’s victory over Europe”.  To unpick that a bit...  it was not "Britain's victory", because Britain was merely one member of a group of Allies, which included the USA, Russia, the free French, the exiled Polish forces, many nations from Africa, India, Australia, Canada, New Zealand....   It is a total fabrication to suggest that we ever "stood alone", even in the "darkest hour" after Dunkirk.  Many of those Allies were Europeans, so of course it was not a victory "over Europe" either.  It was a victory over the racist and oppressive regimes who held power in some European countries, but most victims of those regimes were also Europeans, and for them VE Day represented a liberation, not a defeat.  Germany now calls VE Day "Liberation Day", as President Steinmeier reminded the nation yesterday, while warning against "the temptation of a new nationalism. The fascination of the authoritarian. Of distrust, isolation and hostility between nations. Of hatred and agitation, of xenophobia and contempt for democracy - because they are nothing but the old evil spirits in a new guise."

The day after VE Day is Europe Day.  Five years and one day after the end of the war in Europe, French Foreign Minister Robert Schuman presented The Schuman Declaration, which marked the beginning of the process that has, over the last 70 years, led to today's European Union.  "World peace", the declaration begins "cannot be safeguarded without the making of creative efforts proportionate to the dangers which threaten it....   A united Europe was not achieved and we had war."  It is the most extraordinary irony that VE Day, the Union Jack, the war and that great pro-European Churchill have all been hijacked by the Brexiteers, as if history somehow justifies their preposterous narrative of British exceptionalism.  Surely, if VE Day means anything at all, then it means re-asserting the post-war settlement, of which the European Union has been a central part, creating the longest period of peace between European nations ever.  No two members of the European Union have ever been to war with one another.

As well as the European Union, the post-war settlement saw the establishment of the United Nations, which is the EU's equivalent for the American right: Trump's current whipping boy, the WHO, is a UN agency.  In Britain, the post-war settlement meant the establishment of the welfare state and the NHS - both of which have been systematically undermined for years by successive Tory governments intent on bankrolling the profiteers, with consequences we now see all too well as medical staff die for the want of protective equipment and essential testing is entrusted to provenly corrupt accountancy firms.  Brexit has to be understood as part of a larger programme to dismantle the post-war settlement for private gain, to bring about an extreme global deregulation of economic activity for the most wealthy.  It has nothing to do with patriotism, but it's easily dressed up and sold that way.  If we're not careful, the pandemic will also play into this insidious narrative.
Posted by Michael Walling at 6:45 pm