Supporting the Arts and Cultural Sectors 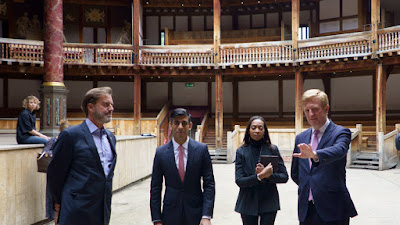 Every picture tells a story.  This is a photo opportunity for the Chancellor and the Culture Secretary, the men in suits who have just announced the £1.5bn rescue package for culture, posing at the Globe Theatre.  In the background, on the edge of the stage, is Artistic Director Michelle Terry.  She looks as if she's not quite sure whether she's meant to be in the picture or not.

Prior to the announcement, the DCMS Parliamentary Committee asked for written evidence on the impact Covid-19 was having on the sector.  Some examples of this evidence was published online.  Ours was not - so we're publishing it here.  The evidence, written by our Chair Dr. Alastair Niven with Artistic Director Michael Walling, was prepared well before the rescue package was announced, and before the deadline for the UK to request an extension to the Brexit transition period.