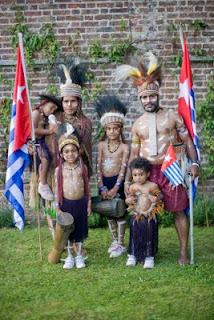 An amazing thing happened at Music in the Yard on Monday. The Lani Singers, our West Papuan performers, were playing on the open air stage at the Guildhall Yard in the City of London. On the other side of the Yard, separated from us by crash barriers, a man was putting out a red carpet. Then the limos swept in, and out got hoards of black-tied bankers and women in cocktail dresses. It was clearly a very posh banquet indeed. Meanwhile, Benny Wenda was speaking and singing about the illegal occupation of his country, and the way in which the Indonesian colonisation is upheld by US foreign policy, as a result of their commercial interests. And then the guest of honour showed up - Condoleeza Rice herself, fresh from unveiling a statue of Reagan.
You couldn't have scripted it better.
Posted by Michael Walling at 4:25 pm