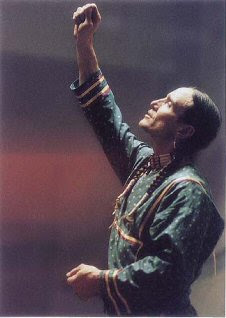 Last night, Robert Greygrass's production Walking on Turtle Island opened as part of our Origins Festival at the Rich Mix. It's an incredible piece of work: Variety wasn't wrong to call it "a tour de force" of acting. In less than two hours, Robert embodies no fewer than 21 characters, suggesting the distinctions in subtle ways, but absolutely making you believe in an aging Native woman, a little girl, a drunk mixed-race man in a cell, a young boy whose dog dies, his grandfather... and binding them all together a spirit figure, who seems in many ways to be remarkably similar to Robert himself. Why? Well, both are shape-changers. The spirit, like Robert, passes into the bodies of all these people through several centuries. It's a beautiful metaphor to link the acting to its meaning, and to suggest the cultural resonance which underlies the entire performance.

This is theatre which gives an alternative history - the native view of what has happened on Turtle Island (North America) from the European invasion to the present day. There are scenes which deal with the first contact, scenes around transplantation, scenes about the reservations, scenes set around contemporary alcohol abuse and custody. So yes, it's a human rights show. But it's so far from being "worthy" - because the whole performance is suffused with Robert's characteristic native wit and humour. In spite of the subject matter, his energy and sheer talent makes it feel light and buoyant - the audience is constantly surprised, excited and thrilled by the virtuosity and human generosity of the whole thing.

Two more performances tonight and tomorrow. Don't miss it.
Posted by Michael Walling at 11:29 am