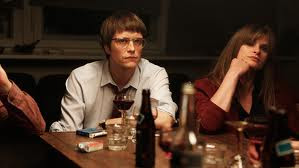 Opera rehearsals thin out towards the opening (which is tomorrow), so I've had a bit of time over the last few days to check out some of the cultural offerings in the Bay Area. It's a very rich place culturally - tons going on - though it helps to have a few dollars to spare if you want to catch a lot of it! Nice to get a few invitations.....

I was at the Closing Night of the Berlin and Beyond Film Festival, which was Andres Veiel's If Not Us, Who - about the Red Army Faction, and in particular Gudrun Ensslin. I remember being very struck by her centrality when I watched The Baader-Meinhoff Complex a while ago. That film was very strong as a chronological account - it simply stated what happened, and left you to deal with it. Veiel, by way of contrast, begins to undertake the difficult task of exploring why it happened. To begin with, I was a bit concerned that we might be in for the pat Freudian explanation: Veiel's degree is in psychology, and the film begins with Bernward Vesper's father shooting his son's pet cat. It looks like another "if only the parents had loved them" film. But then, Veiel brilliantly shifts the ground, as the father tells Bernward that cats are "the Jews of the animal world". The issue is not pat psychology: it's living with the legacy of Nazism. In a stunning moment later in the film, the adult Bernward is told by his mother that his pro-Nazi father only agreed to have children because Hitler was urging Germans to breed. His very existence is the result of the Nazi era. Gudrun's father, perhaps even more strikingly, was a pastor who knew that the regime was evil, but still served in its army. Much of the film is about the disappointment younger people feel with older generations who they feel to be compromised. Powerful stuff in the time of the "Occupy" movement.

David Mamet's latest play, Race, is at the ACT in San Francisco. I had hoped to see the sophisticated and gritty kind of work expected from Mamet - and I confidently predict that when Race gets its UK premiere it will be hailed as doing for race what Oleanna did for gender politics (whatever that was). In fact, Mark Lawson has already done as much when he reviewed the New York production. Well - to my mind, it was a truly repulsive play - and I do not use such terms lightly of an art-form I love. Yes - it was certainly topical - more so since the Strauss-Kahn case, which it echoes, or even foretells, in a number of striking ways. But the underlying point Mamet seems to be making is that questions around historical and current inequalities are being allowed to get in the way of "business success" - and that, apparently, would never do. Mamet, the programme note proudly explains, has announced his "conversion" (note the religious wording) to the Republican right, and published "The Secret Knowledge: On the Dismantling of American Culture, his 200-page pledge of allegiance to conservatism." The law firm where the play is set is "sold out" by a clerk, who is young, female, and black. And a cipher of a character. She manipulates the firm into defending a white man accused of raping a black woman, and then engineers the case so that he is sure to be convicted, against the best efforts of the tough-talking Mamet-style lawyers. Frankly, it smacks of White Supremacism to me.

The contrast with the piece I saw last night in Berkeley could not be greater. Desdemona is directed by our Patron, Peter Sellars, so I will confess to a certain bias born of long friendship - but it is a very deep and necessary antidote to the poison which Race embodies. Scripted by Toni Morrison, with music by the Malian Rokia Traoré, the piece is a response to Othello, following the central female character into an after-life, and allowing her to probe her actions, and Othello's too, and to search for solutions beyond literal or emotional violence between races, or between sexes. Rokia's music is incredibly beautiful - you can get an idea of it here - and Peter's production provides a contemplative space in which you can listen to every nuance of that sound, and to every weighted word of the slim, poetic text. Rokia embodies the figure of Barbary - Desdemona's mother's maid, who died singing the Willow Song. In Renaissance England, "Barbary" meant "Africa" - so the conceit of this piece is that Desdemona was brought up by a black woman, who died - and that this makes sense of her attraction to Othello. In the play, Desdemona and Barbary meet in the world of the dead, and begin a process of negotiation, of working through histories and difficulties, of searching for common language. The end hints at some kind of reconciliation, without stating it in naive or evangelical terms. 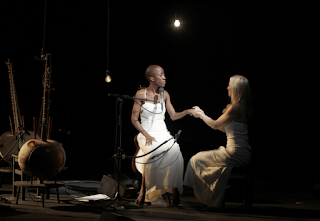 There's a sentence in the text that really struck me very powerfully. I'm writing it down from memory, so it may not be totally accurate - but it's close enough for you to see how clearly this tells us where we are:

"If we have not achieved
the passionate peace
that we desire,
it is because we have not
imagined it."
Posted by Michael Walling at 5:57 am

Email ThisBlogThis!Share to TwitterShare to FacebookShare to Pinterest
Labels: andres veiel, berlin and beyond, david mamet, desdemona, if not us who, peter sellars, race, rokia traore, toni morrison