Xerxes in San Francisco - Thunder in the Pleasure Garden 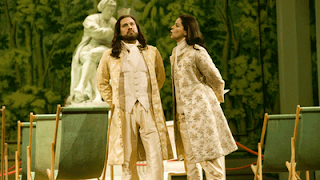 This is the programme note I wrote for the production of Xerxes at San Francisco Opera.
*

Xerxes was one of the last operas Handel wrote for the London opera scene, of which he had been a central figure for some twenty-seven years. Not surprisingly, the music reflects the city at the time – poised and elegant; at times astonishing in its emotional depth and purity; often urbane, ironic, even jazzy; occasionally exotic and a little strange. Our production frames the machinations and passions of the characters within a world that seems most clearly to capture that characteristic complexity of tone: the Vauxhall Pleasure Gardens.

In 1738, under the management of Jonathan Tyers “Undertaker of the Entertainment there”, the Gardens were the centre of fashionable London. They also expressed the city’s reaching out to a wider world. This was the age of early imperialism, of the Grand Tour, and of the first museum collections. Tyers gathered exotic artifacts from warmer climes, showing a particular obsession with the Middle East – a region considered at once fascinating and dangerous, from whence came such innovative fashions as coffee drinking and umbrellas. He also commissioned the French sculptor Louis François Roubiliac to create a statue of Handel himself, which was unveiled in the Pleasure Gardens just as Xerxes was performing at the Haymarket Theatre.

An anonymous Irish gentlemen visiting Vauxhall wrote: “The garden strikes the eye prodigiously; it is set with many rows of tall trees, kept in excellent order, among which are placed an incredible number of globe lamps, by which it is illuminated, and when they are lighted the sound of the music ravishing the ear, added to the great resort of company so well dressed and walking about, would almost make one believe he was in the Elysian fields. In the middle of the garden are two semicircles which appear like an amphitheatre, in which are placed a great number of small booths which may contain about six or eight people apiece, where they commonly refresh themselves with sweetmeats, wine, tea, coffee, or suchlike. The backs of these boxes or booths are adorned with curious paintings, all which are enlightened to the front with globes. They are all numbered, and very just attendance is given by a vast number of warders kept for that purpose. Near to this is a grand orchestra, where the music plays in fine weather; but this night the concert was held in a magnificent hall neatly furnished. At one side of the orchestra is a noble statue of Handel. The music no sooner began than we entered the hall, where fifty-four musicians performed. Mr. Lowe soon sang, whose character I need not here mention, and after him the inimitable Miss Burchell.”

With Handel’s music running through my head this morning, I went for a walk in Golden Gate Park. And here, in the city where we are recreating the opera, was another Vauxhall. Here were the neo-classical pavilions and follies; here were the shrines of art, with busts of writers and composers appearing through the trees; here were the museums and galleries, the coffee houses and the concerts. Here were botanical specimens from overseas put on display for education and delight; here was the fascination with an exoticized and economically colonized Asia. Perhaps contemporary San Francisco is closer to Handel’s London than it may at first appear.

Handel, I am sure, would have recognized the city’s famous queer culture. Although there is no conclusive evidence that he was gay, it was very unusual for an 18th century man to remain unmarried, and even more unusual for all his close friends to be other unmarried men. Certainly he took great delight in the gender-bending possibilities presented by the form of baroque opera. The role of Xerxes was originally sung by the famous castrato Caffarelli, and Arsamenes by a female soprano, “The Luchesina”. I suspect our reversal of the genders of the singers playing these royal brothers would not have perturbed him. Some of the most expressive music is reserved for the cross-dressed Amastris, whose tessitura is so low that in the final ensemble it is she who takes the tenor line. The conventions of gender are blurred. Identity, certainty, becomes brittle and impermanent. Like performance – it delights and then disappears.

The replica of Roubiliac’s statue on the stage tonight does not say “Handel” on its base, but “Timotheus”. Timotheus was the court musician to Alexander the Great; and in 1735 Handel had set John Dryden’s poem Alexander’s Feast, which describes Timotheus playing through the night in Xerxes’ palace at Persepolis, to celebrate Alexander’s victory over the Persian Empire. Alexander then razed the palace of Xerxes to the ground.

Any Pleasure Garden holds within it the seeds of its own destruction.

Posted by Michael Walling at 6:51 pm