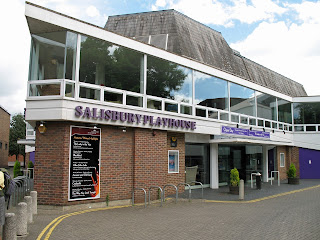 At the beginning of this year, Brian Woolland and I led some workshops with members of the Youth Theatre at Salisbury Playhouse, as a way of kickstarting some ideas for a new play.  The play will be a sequel to This Flesh is Mine: after our Iliad will come our Odyssey.  You read it here first!  On October 24th, we were back there, accompanied by some of the actors from This Flesh is Mine, to give a reading of some scenes from the new piece, again involving the young people.

A youth theatre attached to a provincial rep may seem an odd place to start work on a play based on Greek myth and engaging with current issues in the Middle East - But Salisbury Playhouse is no ordinary provincial rep.  For one thing, since Gareth Machin arrived as Artistic Director, it has become very focussed on new writing, and exciting, engaged, experimental new writing at that.  And, even more importantly for us, Salisbury is a city surrounded by the military - so many of the young people in the youth theatre are from services families.  This meant that they were ideally placed to respond to one of the key figures in The Odyssey - Telemachus, the son of Odysseus, who dominates the first four books of Homer's poem, and remains central throughout.  Most people think that The Odyssey is the story of Odysseus' voyage home: in fact, the stories of the voyage are all told indirectly within the wider story of his family and his land - Penelope and Telemachus are waiting for his return to a space that is increasingly dominated by suitors for Penelope's hand.  Occupiers, if you like.  Why does Odysseus not come back?  When he does come back, what sort of man will he be?  How will he related to a son who he has never known - a son who is now an adult?

These sort of questions were very immediate for young people from military families - and many of them responded in fascinating and productive ways during our workshops early in the year.  Their presence in the reading was extraordinary too - it made us realise how much The Odyssey is about a drama between generations - how very young characters engage with, or turn their backs on, the middle aged.

Brian's new play is going to be extraordinary - a really worthy successor to This Flesh is Mine.  Now all we have to do is make it happen.

Posted by Michael Walling at 4:48 pm