The changing face of Ma Ubu

Ubu and the Truth Commission, like Gielgud's Hamlet, is one of those theatrical legends that I thought I had missed.  Originally created in 1997, in the thick of the South African transition, it came to LIFT in 1999, but I somehow failed to get there.  Since then, I have read and heard so much about this extraordinary performance, and even taught students about it, that it was hugely exciting to hear that it was being revived, with the original two leading actors, and coming to the Print Room.  I was not disappointed.

When William Kentridge's earlier piece with Handspring, Woyzeck on the Highveldt, came to the Barbican in 2011, a lot of people felt that it had "dated", that its style was somehow outmoded.  I didn't feel this - and Ubu seemed to me every bit as much of the now.  In some ways this may sound a bit odd - because the play is so very much about the specific political moment of the Truth Commission, and responds to the hugely challenging questions around justice, reparation, reconciliation and nation-building that it raised.  South Africa likes to tell us that it has moved on: it is rather in the nature of Truth and Reconciliation processes that they encourage a "moving on" once they are complete.  But, as Rustom argues in his book on Terror and Performance, without some kind of reparation, a Truth Commission may in fact have exactly the opposite effect - it can reveal the injustice without setting it right.  As William Kentridge himself has said of the South African TRC: "As people give more and more evidence of the things they have done, they get closer and closer to amnesty, and it gets more and more intolerable that these people should be given amnesty." 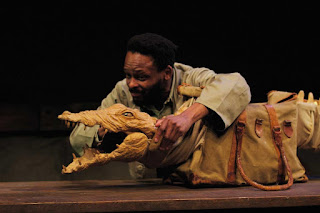 In the programme for this revival, the writer Jane Taylor discusses the question put to her and Kentridge by a South African artist after its early performances: "Why have you not updated the play?"  Her response, which I find persuasive, is that "The pragmatic reality of inventing a viable post-apartheid country have shifted us away from the almost allegorical textures of the Commission and its purposes....  The play and its textures arise from the immediacy of the events: the play was made somehow 'inside' the epoch of the Commission.  A rewriting would falsify the uncertain balancing that captures the particular moment of precarious anticipation."   So the revival becomes an opportunity to look back - a deliberate viewing of a specific moment from the perspective of the changed present.

However, the production is not exactly as it was in 1997.  For one thing, the leading performers, Dawid Minnaar and Busi Zokufa, are older than they were.  Like the audience, they are viewing the troubled birth of the new South Africa from a different, more distant perspective.  And, perhaps related to that, Busi Zokufa's Ma Ubu no longer has a white face. 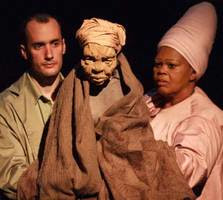 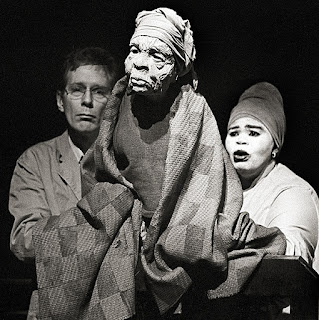 These two images, the top one of the current revival, the bottom one of the original show, make the point very clearly.  In the 2015 version, Ma Ubu wore white make-up only for the scene in which she appeared as a projected image, doing her TV interview.  In the original staging, the role was played entirely in white-face.  This was much discussed at the time - with many commentators saying she epitomised the Afrikaaner women who became obsessed by their own sensory comforts while their menfolk committed the worst crimes of apartheid.  If this was what the character signified, then her portrayal by a black actor in white-face made this performance an explicit commentary on such women from a black perspective.  However, to my mind the character was always more unstable than this: in the text, the very scene which retains the white-face even in 2015 sees her break into Xhosa as she turns on Pa Ubu from the screen.  So perhaps Ma Ubu is a more disturbing figure than a simple portrait of callow Afrikaaner women - perhaps she is also representative of how the black population could become complicit in its own oppression.  Seen like this, the decision of the 2015 production to take her out of white-face is a very bold, radical step.

If, as Jane Taylor implies, the revival looks at 1997 from the perspective of 2015, and allows us to regard the events of that time (including the play) in the light of what has followed, then it needs to take on the emergence of a new black elite, massively wealthy and operating in close cahoots with the white plutocracy and global capitalism.  Alongside this, there persists a deep and enduring wealth gap, with the bulk of the South African population still living in poverty, their lot seemingly just the same as it was under apartheid.  The changing face of Ma Ubu confronts that appalling reality, and her voyage into the sunset with the exonerated white oppressor is all the more chilling as a result.

In a few weeks, I shall be going to South Africa myself, to begin working with Eugene Skeef on our new piece about the end of apartheid.  It feels very timely indeed.

Posted by Michael Walling at 5:33 pm