The Revolt of the Provinces

Can it really only be eleven days?  On the morning of Friday 24th June, I woke up very suddenly to the radio alarm, and the shock news of "Brexit".  Every morning since, the process of waking has felt like times of bereavement: for a moment or two feeling the way into light, and then the terrible reality comes crashing in.  On the evening of the 24th, Lucy and I welcomed guests from Denmark, Germany, Greece and Sweden to take part in our week-long European Playmaking Laboratory.  They were funded by the EU, under the Erasmus + programme for educational exchanges.  It was difficult to welcome them - and more difficult still to keep a sense of balance as the workshop explored themes of migration, the horrors of the refugee crisis, the shifting sands of European and national identities.  All around us, fallout tumbling like toxic snow.

On Tuesday 28th, I had dinner with Coll Thrush - the historian from Vancouver whose work on indigenous travellers to London was so important to our Hidden Histories film.  We found ourselves searching the past to find any analogy with what was occurring - and landed in 1642, at the outbreak of the Civil War - dubbed The Revolt of the Provinces by John Morrill.  Then as now, a London-based elite with strong links to the continent was perceived to be arbitrary and arrogant in its attitude to the country more widely, leading to a conservative revolution.  Then as now, Scotland and Ireland were serious flash points.   Then, there was a rapid descent into violent anarchy, halted only by the imposition of a military dictatorship.  I realise this probably sounds sensationalist - I hope it is.  Coll's response was: "We tend to think of ourselves - Europeans, North Americans - as being immune from that kind of history.  But it has happened before and it could again."  Of course it could.  Think of Ireland.  Think of Yugoslavia.  Think of the 500% increase in racially motivated hate crimes in the week following the referendum.  Think of the way the extreme right steps in when economies fall apart. Think of what Yanis Varoufakis has been arguing about European disintegration leading to a return to the 1930s.

Even before the vote took place, we had already seen the first political murder of the Brexit era.  I have been criticised on social media for calling the death of Jo Cox a direct result of the Leave campaign's xenophobic rhetoric: Thomas Mair was mentally ill, the apologists say.  Of course he was.  So were Michael Adebolajo and Michael Adebowale, but that did not prevent anyone locating their murder of Lee Rigby within a discourse of Islamist terrorism.  Disturbed individuals are open to suggestion, volatile and unstable: of course an atmosphere that breeds hatred will carry them into acts of violence, as it serves to identify their targets.  And make no mistake - the Leave campaign deliberately, cynically, sought to breed hatred and racism.  There has been much discussion of the poster Nigel Farage unveiled on the very day Jo Cox was killed - its image of Middle Eastern refugees (who, of course, have nothing to do with European freedom of movement) directly derived from a Nazi propaganda film. 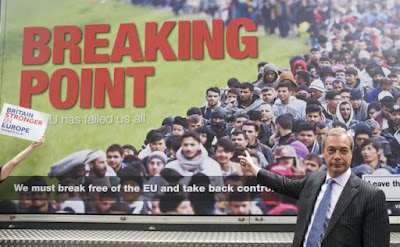 Less remarked upon has been the leaflet delivered to many households - including mine - by the Leave campaign, which featured a map of "Countries set to join the EU", in which Iraq and Syria were prominently named.  This propaganda was produced in cold calculation by intelligent people with the deliberate purpose of misleading the less informed, stoking prejudice, and firing up hatred. 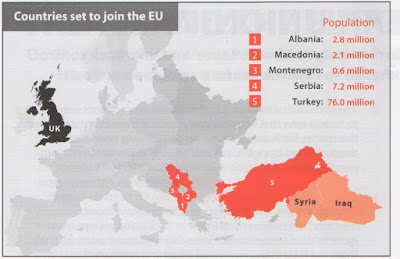 There was poor campaigning on the Remain side too, of course, as one Project Fear competed with another - and this did nothing to assuage the revolt of the provinces - but at least it was not blatantly misleading, manipulative and incendiary.

So - what can we do?  On a long term basis, those of us who work in culture, education, the media and other aspects of public discourse have to reclaim public space for intelligent, nuanced and morally acceptable debate.  The referendum result, hard on the heels of cuts in public spending, is making the work of organisations like Border Crossings infinitely more challenging - and more necessary than ever.  We have to carve out spaces in which we can meet Other human beings AS human beings - overturning the insidious language of labelling and recognising our common humanity.  We have to make emotional connections with the refugees on Farage's poster, with Poles and Romanians, and with the people across the country who voted Leave in protest against their exclusion from political and social processes.  As the great Northern Irish playwright Stewart Parker said in 1986: "If ever there was a time and place that called out for the solace and rigour and passionate rejoinder of great drama, it is here and now. There is a whole culture to be achieved. The politicians, visionless almost to a man, are withdrawing into their sectarian stockades. It falls to the artists to construct a working model of wholeness by means of which this society can hold up its head in the world."

But there is a short term need as well.  We have to fight tooth and claw to remain a part of the European Union, and to assert our identity as an outward-looking, engaged, international and - yes - democratic people.  I recognise that it may sound deeply anti-democratic to suggest that the referendum result should be overturned - but consider this:


So - the avoidance of Brexit would not be an overturning of democracy but its assertion, and this is what we must call on Parliament to do.  It would, I am sure, lead to huge dissent, probably to some violence.  But it would not be so dangerous as the alternative.  If we remain in the European Union, and we still can, then we have the opportunity to work with our neighbours to establish genuinely democratic processes and institutions that are fit for purpose in the globalised world of the 21st century. To leave would be to retreat into the shallow rhetoric of the nation state - a notion of sovereignty outmoded since the time of Wilberforce.

We are part of a continent, we are part of a world.  We have to embrace the other, not separate ourselves from them.  We are interdependent, and so our politics and culture must express our common humanity.  As Jo Cox said in her maiden Parliamentary speech: "We are far more united and have far more in common with each other than things that divide us."

This blog was written by Artistic Director Michael Walling in a private capacity and does not represent an official view of Border Crossings as an organisation or its board of trustees.
Posted by Michael Walling at 5:29 pm