As TOTEM LATAMAT makes its journey towards Glasgow for Cop26, we are asking people who encounter it along the way to write guest pieces about the encounter.  Alexandra P. Alberda spent most of her youth in Bismarck, North Dakota, USA. She is mixed race and Jemez Pueblo, which has meant that she has grown up at the thresholds of cultures.  She is Curator of Indigenous Perspectives at Manchester Museum - the first person to hold such a role.

Between October 21st -24th TOTEM LATAMAT was installed on The University of Manchester’s University Place Square opposite the Manchester Museum across Oxford Road. At the Museum, we are proud to host this important work as it contributes not only to our Indigenising Manchester Museum programme, but also to our hello future programme, which is concerned with climate and environmental action. TOTEM LATAMAT was an example of Indigenous action and lived experiences (through QR extra material) that our communities, students, staff and visitors could encounter. Many remarked to me on the beauty of the work and message, and how the materials seemed very important in considering actions we take.

This installation coincided in a happy accident with the wonderful Corridor of Light celebration, which brings in people and families from across the Greater Manchester area. It was placed next to an audio-visual work by Antonio Roberts called Move Fast and Break Things. Through this event, regular University activity and dozens of prospective student trips on the Saturday, thousands of people viewed or interacted with TOTEM LATAMAT, and I certainly saw at least a couple hundred take selfies with it and read the signs.  Jun Tiburcio’s TOTEM LATAMAT was an important ambassador of Indigenous perspectives on climate crisis/burning and a provoker of conversation. 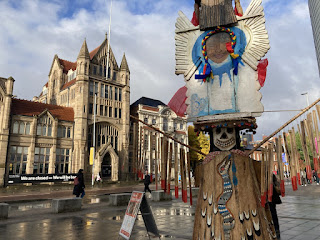 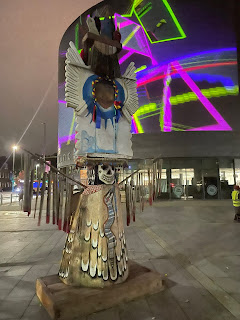 Posted by Michael Walling at 5:27 pm