As TOTEM LATAMAT makes its journey towards Glasgow for Cop26, we are asking people who encounter it along the way to write guest pieces about their response.   David Glover is Chaplain to the Queen, and Rector of Hexham Abbey. 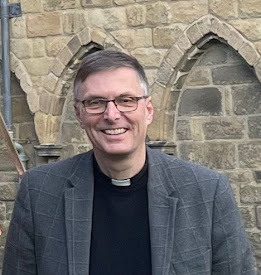 We were delighted to welcome the Totem to Hexham Abbey. It looked stunning and dramatic set against the backdrop of our ancient Abbey Church - the contrast in styles reminding us of both our diversity and interconnectedness as peoples of the earth.
The Totem attracted a host of curious visitors but also a lot of families who took part in a Treasure Trail around the Totem and the Abbey and engaged with important environmental issues. The Totem also acted as a stimulus for an excellent talk by Prof. Graham Harvey in which he both explained the Totem’s imagery but also stressed the vital insights that Indigenous people offer to the environmental challenge. I was particularly challenged by the idea that most in the developed world behave as ‘Human Supremacists’ towards the earth and that Indigenous peoples do not distinguish between human activity and the natural world but are entirely interdependent.
Thank you for stimulating and challenging us at this crucial moment in our world’s life. 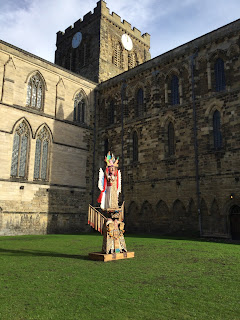 Posted by Michael Walling at 5:48 pm