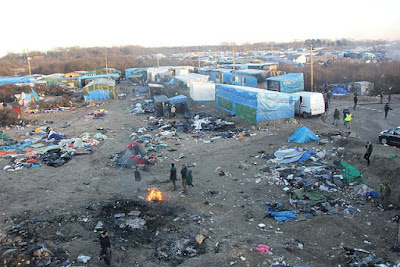 A November weekend and another trip to Calais with Oxfordshire Refugee Solidarity to deliver aid and support.   A van, two minibuses, a stack of aid, 32 volunteers and only one certainty: that every visit is different.  On the Saturday half of the group will go to help at the Refugees Community Kitchen, half will go to Care4Calais.  None of us knows exactly what will be needed or asked of us.
*
I’ve never been to the Kitchen before and don’t know what to expect.  Can you imagine a workspace in an industrial building producing something like 2000 hot meals a day? A workspace with stainless steel preparation tables, sinks for washing vegetables,  deep sinks for washing up,  and a row of cauldrons bubbling over gas rings,  extraction equipment, loud music pumping away, volunteers all dressed in similar outfits?

When you enter you ask, ‘What do I do?’ and someone gives you a job.

Someone explains the task.  The drier bread is to be cut and set aside to be prepared as garlic bread; the packages of pre-wrapped rolls or bread are to be opened.  If the contents are still soft, only just out of date, they will be distributed alongside the hot meals.  Whole loaves are to be cut into manageable chunks.  Some will have to be discarded altogether.

Put bluntly the task was to sort through various kinds of bread because it was deemed no longer fresh enough for sale, no longer good enough for us, that is to say for regular shoppers like me who take a certain quality of freshness for granted or expect it as our right, and sort out what was still useable for them.

Emotion sneaks in through a back door.  I feel myself near tears.  The word BREAD, on every level, carries associations far beyond the texture and flavour of risen and baked dough.  It suggests a universal notion of sustenance, of basic nourishment.  How unbearably invidious to be sorting such a basic food in this not good enough for us but good enough for them kind of way.  Of course, what my brimming feelings really meant was that I’d hit upon an unacknowledged fault-line in my complacency.

But something else, something positive happened as I worked, at first sorting bread, then scrubbing potatoes, then chopping salad.  Working alongside volunteers from France, Belgium, Germany and Canada was incredibly energising.  How wonderful that we were all there with out diversity -- and even our differences -- working alongside each other in an enterprise made necessary by the insistence on borders and destruction and division.  There was no glamour in most of the tasks we were doing:  what was paramount was the idea of service, of getting on with the job – and the need to support the preparation of the day’s meals for the refugees.   Refugees, migrants, people, most of whom we would never meet face to face.
*
Can you imagine a lake surrounded by grassy areas and thickets of bushes and trees, the sort of place you might go with your family on a summer’s evening or at the weekend?   A narrow concrete road that leads you to a car park?  You can’t see that one boundary is a motorway embankment, or that beyond another stretch of woodland are the backs of houses. Here the world falls away, it’s a place to relax.  My grandchildren could skateboard here or dash about on scooters. There’s a colourful sign of Do’s and Don’ts: no motorbikes in the woods, but horse-riding permitted, no swimming in the lake, no picking flowers, but windsurfing is allowed. Do not light fires.

This is where we park the van, roll up the shutter, unfold tables.

Perhaps I only imagine I smell smoke drifting out of the woods.

There are five of us, two experienced long-term volunteers from Refugee Community Kitchen who will co-ordinate and organise the distribution, and three of us to serve the food: rice, a spicy curry, and salad.  I’m to serve the salad.  There are chopped onions, seasonings, bread.

There’s a sail visible on the lake, the waters dark and ruffled by the breeze.

In two’s and three’s figures appear.  Dark anoraks. Scuffed trainers.  Men in worn clothes, huddled against the cold.  We hand out rectangular polystyrene dishes.  Cheerful greetings.  Rice first.  Some ask for more, some ask for the curry to be on top of the rice, some want it separate.  Some don’t want the curry.   Some decline the offer of salad.  Respect the dignity of choice.  I do my best to serve the salad tidily while trying at the same time to make eye contact.  How are you?  Good, thank you.  No no, no  salad thank you.  Plastic spoons.  Thank you, thank you, thank you.  The sun settles, dusk comes.  Would you like more?  For many this is the first food since this time yesterday.  In little groups a stream of people.  A mix of nationalities: Kurds, Iraqis, Afghans.   I am humbled by their thanks, by the generosity of their response.  What does it do to them, this hiding in the woods, avoiding the police, this reliance on donations of food, of clothing? What does it do to them, seeing their tents or other makeshift shelters destroyed by police or having sleeping bags or clothes contaminated with pepper spray?  What does it do to them?

As we drove in I saw a rig on which there were four taps and a long trough at waist level.  There was a man there stripped to the waist, his hair frothy with shampoo, soaping his upper body for the cold water.  They have come to this, somehow, and through what unimaginable dangers.  They have come, following a dream of a better life, a life that they believed must surely be better than existing in a familiar homeland shattered by war.  They have come to this.  We met a man who had twice made the journey from Afghanistan.  He crossed illegally into the UK, was deported and set out again.  Politicians speak about not creating a pull factor, but what kind of ‘pull factor’ was that?  Those same politicians rarely acknowledge courage, initiative or persistence, qualities that should surely be valued.  To see these qualities, to see this potential would be to risk seeing these people as we are trying to do, as human beings in need, as individual human beings, each with hopes and pain, with dreams and loss.  Politicians urge us to look at the bigger picture, but perhaps that way lies not reassurance but madness or despair: the temporary tented camps gradually taking on the social mechanisms of permanence, the fences and razor wire, the infrastructures shattered by war, the disrupted governance, the rival militias, the estimated 65 million displaced persons across the world…

There’s not an exact count but we’ve served somewhere between 150 and 200 meals.  What distresses me almost more than anything is not that the distribution process is so practised, so well-drilled, so efficient, so generous, but that it seems so terrifyingly normal.

It’s getting dark, the wind is really cutting through our clothes as we stand waiting for the last few men to come.  I feel myself impatient to get out of the cold.  It’s about 5 or 6 degrees, and the wind-chill drops that right down towards freezing.  What a relief it will be to slam the door of the van against this cold.  We pack up.  What’s left of the food is loaded back into the van.  We fold the tables and just as we are about to pull down the shutter two or three latecomers arrive.  They too will be served.
*
Bright lights in Calais, a convivial restaurant and illuminations for the Christian Festival. God rest you merry, Gentlemen, let nothing you dismay.   Joyeux Noel.  The winter solstice is barely a month away, the turning of the year, the shortest day … and for the men in the woods, trying to get a little warmth from forbidden fires, the longest night.

Posted by Michael Walling at 4:56 pm