Just occasionally, you see a piece of theatre that completely affirms the necessity of the art form, that speaks to its context with intense moral urgency, that refuses to simplify or to sentimentalise.  Such a piece is The Jungle at the Young Vic.  Seeing this performance was a superb way to end what has been a year of political doubt and moral turpitude.  Everyone who sees this astonishing production will be better placed to move into 2018 with a clearer, more defined sense of how we can "act" in this most challenging of times.

The play was perhaps of particular importance for me, as Border Crossings is working on the new Season of Migrations, and in a couple of weeks I will be in Turkey, joining our partners at Adana University to learn from their work in the refugee camps there.  I had been feeling a deep concern about the ethical dimension of this - how is it possible for artists from the very Western countries that have responded so shockingly to the displacement of so many migrants to engage with them in a way that does not become mere voyeurism?  How can we participate in a manner that is both creatively valid and politically potent?  In the Voices of Culture report, we looked predominantly at work that engaged refugees in an instrumental way, at the same time as lamenting the failure of the cultural sector and of governments to open real dialogues and to engage in genuine intercultural exchange.  My recent talk at the European Culture Forum in Milan made the same point - we can't just employ culture as a way of moulding refugees into some pre-determined new identity, or (worse) as a means to distance them as they "tell their own stories" and make the liberal audience feel positively reassured about their own compassion.  What we have to find is a form that recognises our presence in the unfolding political drama, at the same time as understanding that we are not its protagonists.  The Jungle, written by two young men who engaged deeply with the Calais refugees at their time of greatest need, offers that dramatic validity, fuelled by compassion, humanity and anger. 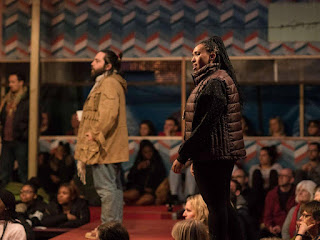 What puts this work head and shoulders above other theatrical responses to the ongoing crisis are a series of courageous theatrical decisions: 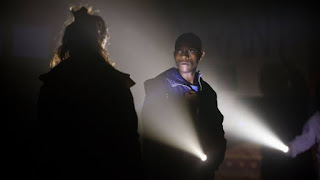 It's been a rather wonderful year for us at Border Crossings, and I had thought that I would use this last blog post to review achievements and look forward.  Well, we know about the achievements, and now I am looking forward - feeling empowered by this stunning piece of theatre further to develop our own ventures in the jungle of culture, policy, and human need.

May 2018 be a year of renewed clarity, commitment and creativity for us all.

Posted by Michael Walling at 7:26 pm